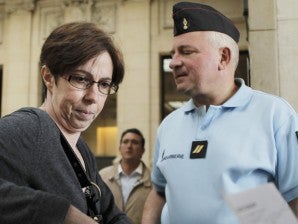 Catherine Tissier, left, arrives at court in Paris Thursday, Sept. 22, 2011, where Tissier alleges mental manipulation to dominate her free will by two Opus Dei followers and an association with close ties to the conservative Catholic group, as they go on trial in Paris, Thursday, accused of forcing Tissier to work for more than a decade with little or no pay. Tissier was 14-years old when she joined the Donson hotel school in eastern France, where the religious sacraments were led by Opus Dei. (AP Photo/Jacques Brinon(AP Photo/Jacques Brinon)

PARIS—Two members of the powerful Roman Catholic organization Opus Dei went on trial in a Paris court on Thursday accused of subjecting a disciple to years of abusive working practices.

The case comes after a nine-year probe and centers on Catherine Tissier, who says that as a teenager she was forced to work 14-hour days, resulting in charges of inadequate remuneration and illegal employment.

Claire Bardon de Segonzac, the head of the Dosnon School attended by Tissier, and Agnes Duhail, head of the Couvrelles International Meeting Centre connected to the college in northern France, are defendants at the trial.

The University and Technical Culture Association (ACUT), which runs the school, is also a defendant, but has said it has no more than a “cultural link” with the conservative Opus Dei group.

Tissier joined the school in 1985, aged only 14, and says she only later discovered it was run by associates of Opus Dei, which in Latin means “Work of God” and so is often referred to simply as “The Work”.

She said she was forced to take vows and made to work as a domestic servant for virtually no pay. Opus Dei has insisted it was “not involved in the charges being brought” and had “nothing to be guilty about.”

The accused are charged with having “obtained from young students of the Dosnon School or those in an obvious state of psychological fragility… unpaid services or those paid with no respect for the work done.”

Tissier said the group compelled her to take vows of obedience, poverty and chastity and for the following 13 years gave her jobs with organisations that her lawyer Rodolphe Bosselut said were linked to Opus Dei.

She said she was made to work 14-hour days, seven days a week, cleaning and serving. Staff paid her a salary and then reclaimed money from her by making her sign blank cheques, supposedly to pay her room and board, she alleged.

The salary “went into my bank account, but left of its own accord,” Tissier told the court. “I never saw the money. The management took the money back.”

Defendant Duhail said: “She was paid, all the social security payments were made… She always did what she wanted.”

“Everyone was paid and did what they wanted with the money. She’s the only one saying these things,” said Bardon de Segonzac.

“I’m the only one who dared lodge a complaint,” said Tissier. “I know people who got out and who say exactly what I say. Some of them still tell me: ‘I have nightmares at night. I’m afraid.'”

Staff accompanied her wherever she went, including on visits to the doctor, she said. On these occasions she said she was taken to see an Opus Dei doctor who prescribed tranquilisers that left her “senseless”.

“I went to my parents’ doctor urgently in January 2001,” Tissier told the court. “He told me that I was heavily drugged, with anti-depressants.”

Tissier weighed only 39 kilograms (86 pounds) when her parents rescued her from the group in 2001. Lawyers first took legal action that year alleging “mental manipulation” among other charges.

Other witnesses who appeared in court Thursday denouced the tight grip that the sect exerts over many of its members.

“The sectarian dimension is obvious to me,” said Blandine Dumont who worked as a secretary at Donson’s hotel management school.

“We give everything that we earn to God via Opus Dei,” she testified, after recounting her work days that started at six in the morning and ran to ten at night, filled with nothing but prayer and work.

Some 15 other witnesses are expected to testify at the trial.

The organisation, which is branded a secretive sect by some critics, came to wide attention after being portrayed as a secretive and violent cult in the blockbuster novel and film “The Da Vinci Code”.

Opus Dei strongly objected to its portrayal in the film.

The group — which has a chiefly lay membership estimated at 80,000 — was founded in 1928 by Jose Maria Escriva de Balaguer, who was canonised in 2002 with support from the late pope John Paul II.