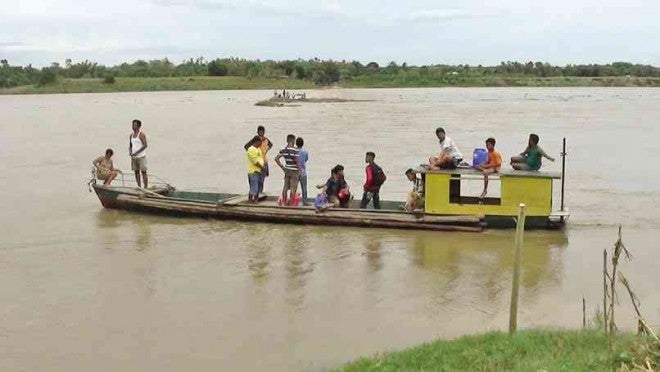 VILLAGERS rode a boat on the Santo Tomas-Cabagan River as the overflow bridge on Sept. 15 was submerged in floodwater due to Typhoon “Luis.” VILLAMOR VISAYA JR./INQUIRER NORTHERN LUZON

The Department of Agriculture (DA) placed farm losses at P409.7 million, based on an initial assessment, while the Department of Public Works and Highways (DPWH) said 11 national roads in Luzon were still closed to traffic due to landslides and floodwaters caused by Luis.

In Pangasinan, Luis killed two persons and flooded 26 towns and cities due to the heavy rains it dumped as it crossed northern Luzon toward the West Philippine Sea on Monday, officials said.

Avenix Arenas, spokesperson of the Pangasinan Provincial Disaster Risk Reduction and Management Council (PDRRMC), said the body of Edmundo Dimatulak, 40, of Tarlac City, was found 2 kilometers away from a bridge in Burgos town on Monday.

Dimatulak, who was driving a motorcycle, tried to cross a detour road below the bridge on Sunday night but was swept away by a strong current.

Arenas also said another drowning victim, Rogelio Sayan, 74, was found floating in the Camanggaan River in Binalonan town at 10 a.m. on Monday.

She said Sayan, who was from Barangay (village) Alibeng in Sison town, might have been swept away by a strong current of the Aloragat River.

Only 44 villages in four towns and three cities remained flooded on Tuesday. These were in the towns of Calasiao, Rosales, Sta. Barbara and San Fabian and in the cities of Dagupan, Urdaneta and Alaminos.

In Cagayan, police said Javier Mateo, who was a month and 19 days old, died when a branch of a mango tree fell on his family’s house in Barangay Sto. Domingo in Piat town on Monday.

Reports from the Cagayan PDRRMC said seven houses in Iguig town and Tuguegarao City were destroyed while at least 280 more houses were damaged in other areas in the province.

In Nueva Ecija, Supt. Wilson Santos, police chief of Talavera town, said rescue teams had yet to retrieve the body of Oscar Aresa, a farmer in Barangay Cabubulaunan.

Santos said a village official reported seeing Aresa pull out his carabao from the rampaging waters in a river shortly before he disappeared.

At least 351 families, or 1,355 people, sought safety in 20 evacuation centers set up inside schools, chapels and village halls in the region, reports from the Regional Disaster Risk Reduction and Management Council (RDRRMC) showed.

In Tarlac province, 1,057 families from 15 villages in Gerona, Mayantoc, Paniqui, San Clemente, San Manuel and Sta. Ignacia towns were affected by the floods, according to the Tarlac PDRRMC.

In Zambales province, 37 houses were damaged in Palauig, Iba and Masinloc towns.

As of noon on Tuesday, rice farms suffered the worst with some 15,500 tons or P270.3 million worth of paddy rice lost, according to the DA.

Also ravaged were P134.8 million worth of corn, representing almost 10,000 tons of harvest. The DA, however, said all 18,747 ha of affected corn farms had a chance of recovery.

Destroyed by Luis were 275 tons of high-value crops, such as fruits and vegetables, worth P4.4 million.

Cagayan Valley reported the biggest loss among the five affected regions, including the Cordilleras, Ilocos, Central Luzon and Bicol, with P262.2 million.

Damage from Luis meant a reduction in rice production by 0.08 percent from the full-year target of 19.07 million tons, the DA said.

Also, Luis’ toll on rice output accounts for 0.2 percent of the 7.3 million tons forecast for the fourth quarter of 2014.