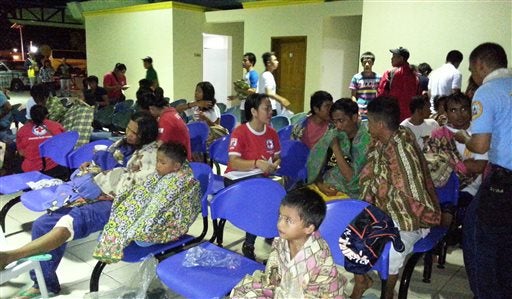 In this Saturday, Sept. 13, 2014 photo released by the Philippine National Red Cross Surigao Del Norte Chapter, survivors from the ferry M/V Maharlika II that sank after encountering steering problems, keep themselves warm with blankets as they arrive at the Lipata Port Terminal in Surigao city, central Philippines. AP

‎Of the three, two were found at 12 noon on Monday 2.5 nautical miles west off Hagakhag Island. Domingo said that one of the fatalities is estimated to be a female her mid 30s.

“(However), there is no information yet that will confirm that three bodies recovered are the reported three missing individuals on the sunken ship,” Domingo said in a statement.

As of 8 a.m. Monday, three were recorded dead in the maritime accident, including Rahima Ismael, 20, Armando Mosqueda, and an unidentified victim. ‎Three others were injured.

The bodies were brought to Aldonza Funeral Homes in Surigao City.

“The Navy would still continue its operations to assist and recover the survivors and fatalities of the sea mishap that had transpired this weekend,” Domingo added.

On Saturday night, Maharlika 2, carrying 58 passengers and 31 crew members, sunk when it encountered a steering casualty.