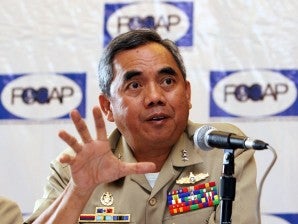 MANILA, Philippines–Officials on Monday clarified that the three fatalities earlier reported by the disaster mitigating council was not due to typhoon “Luis” (international name: Kalmaegi) but because of the ship that sank off San Ricardo in Southern Leyte.

“As of this hour, there were no casualties recorded yet of typhoon Luis,” Alexander Pama, National Disaster Risk Reduction and Management Council (NDRRMC) executive director, said in a press briefing.

Earlier Monday, the NDDRMC reported that three people died as “Luis” pummeled portions of Luzon provinces over the weekend.

On Saturday night, the roll-on, roll-off ‎MV Maharlika 2 carrying 58 passengers and 31 crew members sank after it encountered engine trouble. Three died while three others were hurt.

But Interior Secretary Manuel “Mar” Roxas II made clear it can’t be said that the bad weather caused the ship to sink as there were five others plying the same route as MV Maharlika 2 that safely reached their destinations.

“There was something wrong with the ship before the sinking happened. In fact, (other ships in ‎the same vicinity) helped in the search and rescue so we cannot say that the accident is directly connected to Luis,” Roxas said.