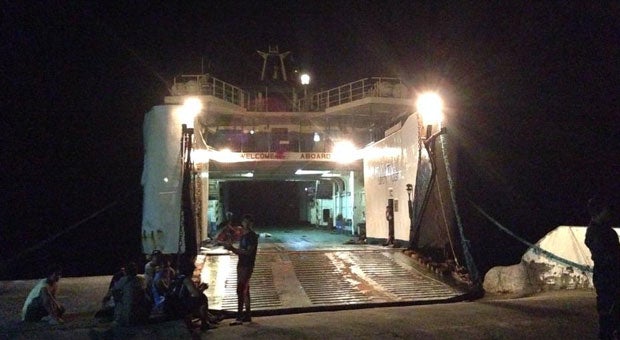 This was how survivors of the roll-on, roll-off MV Maharlika 2 described the ill-fated interisland ferry, which sank on Saturday night due to engine trouble and bad weather off San Ricardo in Southern Leyte.

As of 11 a.m. Sunday, Provincial Disaster Risk Reduction Management Council (PDRRMC) officials placed the number of survivors at 110, with three confirmed dead and 14 injured who were taken to Caraga Regional Hospital in this city.

“The boat had engine trouble. Then there were big waves,” said a woman in her 40s, one of the survivors being treated at the hospital. She did not want to give her name and begged to be left alone, saying she was still shaken by the event.

Another survivor said almost all passengers managed to grab life vests but some were unable to get out of the vessel when the boat captain ordered it abandoned sometime between 6 and 7 p.m.

At least four ships were involved in the rescue operations. A Philippine Air Force rescue helicopter did not find any survivor when it made a flyby around 10 a.m. Sunday, said Capt. Joseph Coyme of Philippine Coast Guard-Northern Mindanao.

The Associated Press (AP) quoted survivors as saying that they floated and were tossed about by the churning sea in pitch-black darkness for six hours while praying and holding on to an overturned life raft before a passing ship rescued them.

“A few more hours in those huge, huge waves and we could have all died,” Romeo Cabag, 32, a security guard who survived with his wife, Wilma, told the AP. “I had cramps in both legs, was exhausted and at one point I was beginning to pray that if I won’t make it, that God allow at least my wife to live.”

Maritime officials said the vessel sunk a kilometer off the coastal village of Cogon, Pintuyan town, near San Ricardo, based on the last call from one of its crew.

According to the official manifest, the ship carried 58 passengers, and 13 vehicles of varying sizes, including a passenger bus.

A source from the Philippine Ports Authority, who asked not to be named, said the vessel that sank was already 30 years old.

Cmdr. Armand Balilo, spokesman of the Philippine Coast Guard (PCG), said in Manila that 116 people were  on board the vessel. He said 110 of them had been rescued and three had died. He said PCG rescue teams were searching for the three missing.

Citing a report of the Coast Guard station in Cagayan de Oro City, Balilo disclosed that three children—two boys and a girl—were among the survivors. They were among 34 people rescued by the MV Maharlika 4, a sister ship of the ill-fated vessel, he said.

Fifty-six others were rescued by the MV St. Martin, another interisland vessel; 19 by the foreign merchant ship MV Lara Venture; and one by the MT Orient King.

In a phone interview, Balilo said the PCG would look into reports that nearly two dozen passengers—mostly drivers and conductors of the 13 vehicles the ship was also carrying—were not listed on the vessel’s manifest. “All persons on board the ship should automatically be listed on the manifest,” he said.

Citing an account of Juan Cayago, the ship’s captain, Balilo said the vessel was carrying 85 passengers and 31 crew members, or a total of 116 people.

Balilo disputed a radio report that the MV Maharlika 2 sailed despite a gale warning issued by the weather bureau. “No public storm warning has been issued for that particular area,” he said. Before it sank, he said, the vessel “managed to send a distress call when its engines stalled and the ship went dead on the water.”

The PCG “promptly alerted its stations in the area, as well as sent notices to passing mariners to come to the ship’s rescue,” Balilo added.

A PCG report from Maasin, Southern Leyte, said the Maharlika 2 may have been slowed by rough seas and big waves spawned by Typhoon “Luis.”–With reports from AP, Jerry E. Esplanada in Manila, Jani Arnaiz and Vicky Arnaiz, Inquirer Visayas