MANILA, Philippines—Sen. Ferdinand “Bongbong” Marcos Jr. wants Nur Misuari, the fugitive founder of the Moro National Liberation Front, on board before the Senate passes a law that would establish a new Bangsamoro political entity in  place of the Autonomous Region in Muslim Mindanao which he helped establish and led for a while.

Marcos, who chairs the Senate committee on local government, is looking into the possibility of having the warrant for Misuari’s arrest suspended so he could attend the public hearings on the proposed Bangsamoro Basic Law.

“He is still wanted in the sense that he has a warrant against him,” Marcos told reporters after President Aquino turned over the draft Bangsamoro law to congressional leaders in a ceremony in Malacañang.

“We are thinking about allowing a suspension of that to allow Chairman Nur Misuari to come and speak and give us his idea because if you remember the Zamboanga uprising was precisely a product of the MNLF feeling that they were left out of the process.”

Marcos was referring to last year’s siege of Zamboanga City by members of an MNLF faction led by Misuari.

Misuari’s fighters allegedly took 198 people hostage and used them as human shields. At the end of the 18-day battle, 20 government troops were killed while 194 others were wounded, according to the military. The MNLF lost 208 members while 294 were captured. 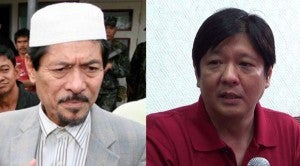 “It is for the MNLF as well as much as it is for all the Muslim ethnic tribes, the Christian settlers, and the indigenous peoples in the prospective Bangsamoro government territory,” he said.

The House of Representatives has formed an ad-hoc committee to scrutinize the Bangsamoro bill. At the Senate, the initial task would fall under the committee on local government and the committee on peace, unification and reconciliation.

Marcos said he planned to conduct committee hearings not only in Manila  but also in areas that would be governed by the new Bangsamoro political entity.

“My approach to the entire process is simple: It’s that we will allow everyone who wants to say something or has a view or has an opinion that is valid and a reasonable, [to have a] venue for them to make their case,” he said.

The Bangsamoro’s core territory will include areas currently under the Autonomous Region in Muslim Mindanao.

It will also include the towns of Baloi, Munai, Nunungan, Pantar, Tagoloan and Tangkal in Lanao del Norte, plus barangay units in the towns of Kabacan, Carmen, Aleosan, Pigkawayan, Pikit and Midsayap that agreed to be included in the ARMM in 2001.

The new territory will also cover Cotobato and Isabela cities, and “contiguous areas” that wish to be included by virtue of a local government resolution or petition by registered voters.