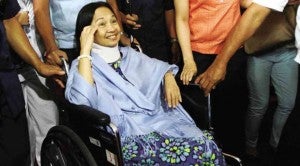 MANILA, Philippines–Former President Gloria Macapagal-Arroyo is “physically OK,” according to the director of the Veterans Memorial Medical Center (VMMC), where the current Pampanga representative is confined under hospital arrest.

“GMA is OK. She is physically OK,” VMMC director Nona Legaspi told the appropriations committee of the House of Representatives, which deliberated Tuesday on the proposed P141.85-billion budget for 2015 of the Department of National Defense.

Upon questioning by Bayan Muna Rep. Neri Colmenares, Legaspi said Arroyo was in good condition, but she did not elaborate.

“Can you tell us what ‘OK’ means? Is she jogging?” asked Colmenares, who remarked that Legaspi was being too conservative in describing Arroyo’s condition.

“Not jogging,” replied Legaspi. “She’s physically all right. I cannot say psychologically, because we don’t have the capability to evaluate that aspect since you have to get the patient’s consent.”

Legaspi also replied in the affirmative when Colmenares asked if Arroyo was “up and about.”

Arroyo has been held at the hospital in Quezon City since October 2012 in connection with a plunder charge arising from the alleged misuse of P366 million in state lottery funds.

She has undergone three spine and neck surgeries after she was diagnosed with cervical spondylosis.