On Int’l Literacy Day, one woman reaches for the sky 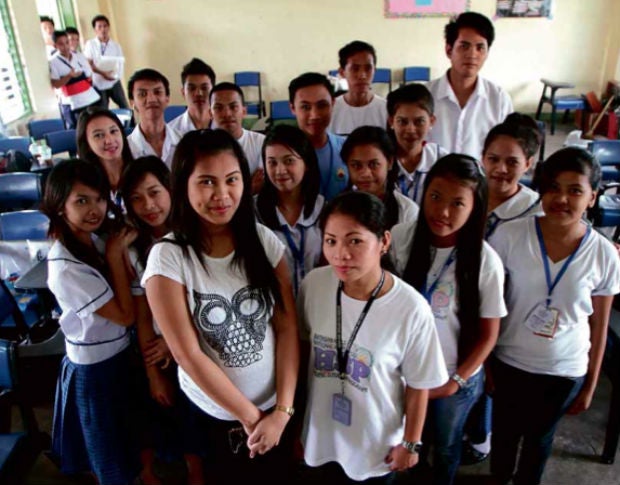 NAMOC (right, foreground) takes a class picture with fellow students in the Batasan Hills National High School Alternative Delivery Mode program which allows them to resume their education in a nonformal setting. She is president of the IV-Section K class. LYN RILLON

MANILA, Philippines–It took an insult to push 31-year-old Mary Ann Namoc to go beyond what others had set as her limits.

“I can and will amount to something,” Namoc told the Inquirer, remembering how her former French employer had belittled her intellectual capacity, being a high school dropout working as a domestic helper in Abu Dhabi.

“You will never amount to anything. You never even finished school,” Namoc quoted her employer as saying three years ago, the scathing remarks that succeeded in bringing her to where she is now.

She goes to school on Saturday along with 2,000 other students enrolled in the Quezon City secondary school’s ADM program. She is president of her class and is among the top students in the program.

On the way to proving her former employer wrong, Namoc, a single mother, said she wanted to serve as a model for her two sons and teach them that they can be what they choose to be.

Batasan Hills National High School ADM Coordinator Ruth Yap told the Inquirer the program evolved from the home study system initiated by Dr. Romulo Rosena. It was initially offered in 1999 to people who could not get permanent work because they did not have diplomas.

The program eventually accepted the sickly, working students, those unable to continue their formal education due to pregnancy or financial problems, as well as those considered too old for high school, specifically people over 17.

“These are people who cannot go to school every day and join the regular classroom setup,” Yap said.

She said the program developed into the ADM in 2010 when the student population swelled to 700.

“Even if we wanted to, we could not merge them into the regular program as an option because we were already congested with approximately 12,000 high school students in our classrooms from Monday to Friday,” she said.

According to Yap, the students enrolled in the ADM had grown to 2,156. On top of the Saturday classes, the program has incorporated online modules so students could study on their own.

“We thought of setting up Sunday classes but most of them will be unable to attend. A number of our students are house help and it is their only day off from work, and most of them are parents,” she said, adding that the system of uploading modules on the Internet had so far been effective for the students.

Some students who do not have access to the Internet are given hard copies of the modules on eight subjects and are accommodated by teachers for consultations on the lessons which are synchronized with those in the regular classrooms.

Namoc’s story and her fight for functional literacy comes as the world celebrates International Literacy Day Monday, which was proclaimed by the United Nations Educational, Scientific and Cultural Organization (Unesco) on Nov. 17, 1965.

Unesco defines functional literacy as “the ability to understand and employ printed information in daily activities at home, at work and in society.”

Unesco further describes a functionally literate person as someone “who can engage in all those activities in which literacy is required for effective functioning of his group and community and also for enabling him to continue to use reading, writing and calculation for his own and the community’s development.”

According to the National Statistics Office 2010 Census on Population and Housing, only 83.8 percent of Filipinos are functionally literate and only one of nine can read and write but cannot compute or are actually deficient in numeracy skills. They also find difficulty in managing daily living and employment tasks that need reading skills beyond the basic level.

Namoc was introduced to the program when, in 2012, an advertising streamer caught her attention while she was picking up her son from the Corazon Aquino Elementary School, across from the Batasan Hills National High School.

“I remember telling myself, ‘This is my chance to study again and get a diploma,’” Namoc said.

She enrolled in the program several months after she left her job in 2011 as a domestic helper in Abu Dhabi, driven home by the demeaning sentiment of her employer.

“I did not even finish my employment contract and just left. I decided then I will go home and finish my studies,” Namoc said.

Namoc was 2 years old when her mother died. Growing up with three older sisters on Siargao Island in Surigao del Norte, her only concern was how to survive.

“I was in Grade 2 when I started to work as a house helper,” she said of the job she took by choice because she wanted to continue studying.

In high school, she moved from one school to another because her sister, with whom she lives, started working in Manila and constantly switched jobs.

In 2001, she herself started working because her sister stopped supporting her education.

For years, Namoc worked as a house help until she got a job as a saleslady in 2007 at a mall along Commonwealth Avenue. She then sought employment abroad, where she worked as a domestic helper from January to September 2011. When she came back home, she returned to her old job.

“I want to become a teacher,” she said. “I will go to college after I get my high school diploma and be a teacher.”

She said that she wanted primarily to teach her older siblings, now in their 40s, who were not able to finish elementary school and were too shy to go back.

“I want to help other people who want to learn and maybe inspire those who think they are too old to study,” Namoc said.

She is thankful for her former employer’s challenge, which drove her to reach out to greater heights.