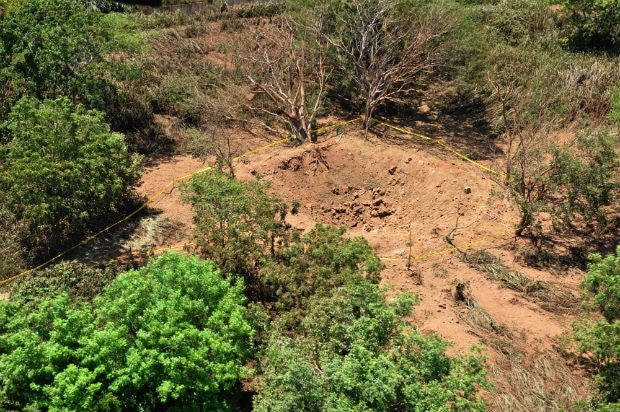 In this Sunday Sept. 7, 2014, publicly distributed handout photo provided by the Nicaraguan Army shows an impact crater made by a small meteorite in a wooded area near Managua’s international airport and an air force base. Nicaraguan government spokeswoman Rosario Murillo said Sunday that a loud boom heard overnight by residents of the capital was a “relatively small” meteorite that “appears to have come off an asteroid that was passing close to Earth.” AP/Nicaraguan Army

MANAGUA – A mysterious explosion that rocked Nicaragua’s crowded capital Managua, creating a large crater, appears to have been caused by a meteorite, officials said Sunday.

Amazingly, in a sprawling city of 1.2 million people, the impact near the international airport did not cause any known injuries, but it did leave a crater measuring 12 meters (39 feet) across.

“We are convinced that this was a meteorite. We have seen the crater from the impact,” said Wilfredo Strauss of the Seismic Institute.

The meteorite appeared to have hurtled into a wooded area near the airport around midnight Saturday, its thunderous impact felt across the capital.

The hit was so large that it registered on the instruments Strauss’s organization uses to size up earthquakes.

“You can see two waves: first, a small seismic wave when the meteorite hit earth, and then another stronger one, which is the impact of the sound,” he said.

Government officials and experts visited the impact site on Sunday.

One of them, William Martinez, said it was not yet clear if the meteorite burned up completely or if it had been blasted into the soil.

“You can see mirror-like spots on the sides of the crater from where the meteorite power-scraped the walls,” Martinez said.

Government spokeswoman, First Lady Rosario Murillo, said Managua would be in contact with the US Geological Service to try to get more information about “this fascinating event” in the Central American nation, one of Latin America’s poorest countries.

People who live near the crater told local media they heard a blast they took for an explosion, and that liquid, sand and dust were blown through the air, which smelled like something had burned.

There were no reported injuries because the impact was in a wooded spot, and flights at the airport were not affected.