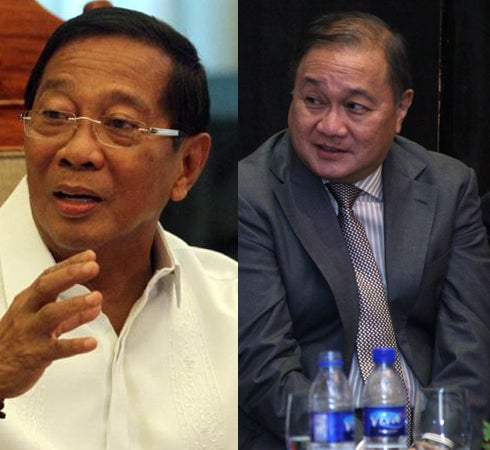 Binay disclosed his preference for Pangilinan, chair of the giant Philippine Long Distance Telephone Co. (PLDT), as his vice presidential running mate in 2016 in an interview published in the Inquirer on Sunday.

He said he had spoken to Pangilinan and asked him to be his running mate. The last time they talked about it was last month, he said.

Pangilinan, however, told the Inquirer that he had no plans to run for any public office.

“Binay has no choice but to fight the elections on economic and clean government issues. It makes perfect sense to get the optimal choice to fight economic battles, a field that nobody knows better than MVP,” Aggabao said, using the initials by which Pangilinan is better known.

Aggabao is a member of the Nationalist People’s Coalition (NPC), a political party founded by businessman Eduardo “Danding” Cojuangco Jr.

“Being a nonpolitician, MVP comes to center stage clean and unscathed. I would argue Binay and MVP would make a formidable team,” Aggabao said.

Binay’s vocal critic in the House, Caloocan Rep. Edgar Erice, said he thought such a partnership was possible before the Senate uncovered irregularities in the construction of a parking building in Makati City during Binay’s term as mayor.

“But now I think MVP is shunning away, that is why he has to offer MVP through an Inquirer banner story,” Erice said.

“I think the Vice President will have a hard time finding a [running mate] except for ‘Pogi’ and ‘Sexy,’” Erice said, referring to Senators Bong Revilla and Jinggoy Estrada, who were given those codenames by detained businesswoman Janet Lim-Napoles, the alleged brains behind the P10-billion pork barrel scam.

ACT Teachers Rep. Antonio Tinio said Binay-Pangilinan would be an “unbeatable combination” at first glance because of the Vice President’s popularity and the PLDT chief’s access to financial resources.

“But Binay must respond to the grave allegations of plunder of the funds of the city of Makati. Pangilinan’s close ties to foreign big business interests, such as the Indonesian Salim Group, must be scrutinized before a run for the country’s second-highest post can be considered,” Tinio said.

“Are they serious?” was Akbayan Rep. Walden Bello’s reaction to the news that Binay was aggressively courting Pangilinan to be his running mate.

“That would be a perfect target, a marriage of corruption and Meralco greed. I’d leave Congress and campaign against such a tandem pro bono. It’s too juicy a target to pass up,” said Bello, whose party-list group is a key cog in the LP-led coalition in Congress.

Cavite Rep. Elpidio Barzaga of the National Unity Party (NUP) said a Binay-Pangilinan team was just speculation, as Pangilinan has firmly stated that he will not run for public office.

“Let us respect the constitutional right to privacy of MVP—the right to be left alone,” Barzaga said.

“Let us not destroy his concentration to make the Smart Gilas team champions in the forthcoming Asian Games,” he said.

Iloilo Rep. Jerry Treñas of the Liberal Party does not think a Binay-Pangilinan team is possible because the tycoon is not interested in politics.