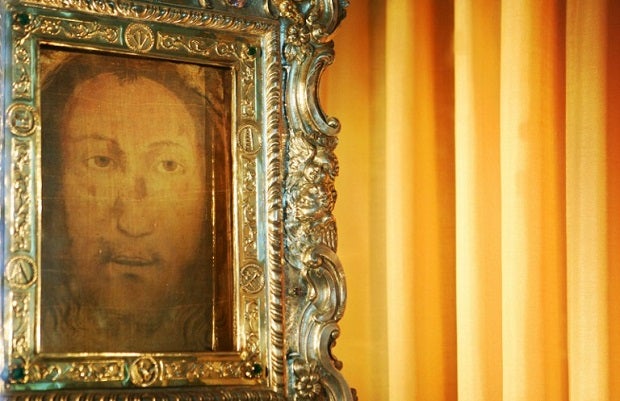 The “Veronica’s Veil”, a mysterious icon that many believe shows the face of Christ is pictured, 26 August 2006 in Manoppello, in the Holy Face Santuary, a monastery in the Abruzzo region east of Rome. AFP FILE PHOTO

MANILA, Philippines – Filipino Catholics will have a chance to venerate a piece of cloth bearing what the faithful believe is an original imprint of the face of Jesus Christ.

Known as the “The Holy Face of Jesus from Manoppello,” the veil will be in the Philippines on September 10 to 17 directly from a tour of the US West Coast and Las Vegas, according to a post on the website of the Catholic Bishops Conference of the Philippines.

Also called “The Veil of Manoppello,” it has been housed for 500 years in the Capuchin Friary in Abruzzo, Pescara, near Rome.

The veil has drawn pilgrims to the obscure hilltop village following the visits of then Pope Benedict XVI to the shrine early in his pontificate.

“These papal visits have since called attention to the veil’s significance in the history of Christ’s life on earth,” according to the CBCP post.

It added that Pope Emeritus Benedict XVI was reported to have been drawn to Manoppello after receiving the first printed copy of The Face of God, a book by German author Paul Badde, which covers 10 years of intensive studies on the veil by professors, scientists, iconographic experts, and authorities of the Catholic Church.

The veil may be venerated at the Santuario de san Antonio, Forbes Park, in Makati City for a 6 p.m. Mass on September 10.

The following day, September 11, the Holy Face of Jesus joins the Marian pilgrimage activities in Lipa, Batangas, from 10 a.m. to 3 p.m. It will be transferred immediately after to the Montemaria Shrine in Batangas City for a 6 p.m. Mass.

On September 12, the veil will return to Lipa at 7 a.m. for Marian pilgrimage activities until 5 p.m.

The image will arrive on September 13 at the Edsa Shrine for a Mass at 12:15 p.m. At 3 p.m., it will leave for the Holy Face of Jesus Chapel  on Hidalgo Street in Quiapo, Manila, where Fr. Carmine Cucinelli, rector of the Basilica of the Holy Face of Manoppello, will deliver a short talk, followed by Mass.

At 3:30 p.m., a vigil will be held at the Immaculate Conception Cathedral at Plaza Rizal, Malinao, Pasig City.

On September 16, the veil will be at the Immaculate Conception Parish Church at Nampicuan, Nueva Ecija, from 10 a.m. to 4 p.m.

A farewell Mass will be held at 6:15 a.m. on September 17 at the Santuario de San Antonio in Forbes Park.

The CBCP post said that while its origins were largely anecdotal, years of scientific study and historical research now report the veil as having the following attributes:

* The faces on the more famous Shroud of Turin and that on the Manoppello Veil coincide perfectly;

* Both images are “acheiropoietas,” meaning they could not have been made by human hands;

* The veil—measuring a mere 7 x 10 inches—is dated between the time of the Christ’s Crucifixion and the Resurrection.

* The Shroud of Turin shows the image of a man with closed eyes and fresh wounds, while that on the Manoppello veil features a face with open eyes and closed wounds.
RELATED STORIES: