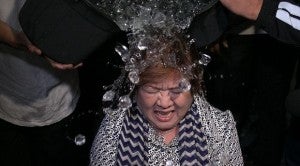 “One of the best secretaries this country ever had who we are sure in 2016 will become a senator of the Republic of the Philippines, with the backing of the BI and the people of CDO,” Rodriguez, a former immigration commissioner, said of De Lima during his keynote speech.

The Bureau of Immigration is an agency under the Department of Justice.

“Secretary, do not accept the chairmanship of the Comelec (Commission on Elections). Be a senator, you are already very high in the surveys,” Rodriguez told De Lima.

“You know, in Congress, if you are already a Comelec Chairman you will be on the other side, you will be questioned by a senator or a congressman. But if you are a senator, you question the chairman of the Comelec,” he added, drawing laughter from the crowd.

In an interview, Rodriguez said he was endorsing De Lima because “she has a very good performance, excellent performance as the secretary of justice and the people will vote for her in Mindanao.”

He said he would prefer De Lima to run for senator instead of becoming the head of the Comelec because “she can do a great job in legislation.”

De Lima indicated that she was not interested in being appointed chairperson of the Comelec, despite reports that President Benigno Aquino III and incumbent Comelec Cairman  Sixto Brillantes Jr. wanted her to be the next head of the election body.

De Lima worked at the House of Representatives Electoral Tribunal from 1993 to 1995, after which she returned to private practice, focusing on election cases.

Sought for comment on Rodriguez’s open endorsement of her, De Lima said : “I don’t have plans yet; I really do not know. I really don’t know, I’m not sure yet whether I’m prepared to enter the political arena. People have been asking me about that, but honestly, I don’t know yet.”

“I would not know when is the right time to really make such a decision… I’m always prepared for anything, but right now I cannot categorically say,” she told reporters.

Pressed further, De Lima said her decision would “depend on how all of this political heat or election fever will heat up.”

“Let’s see the situation. I’ll see if it’s time to make a decision. It really depends on the development although end of December is still a bit early for 2016. Perhaps next year, first quarter of next year, let’s see,” she said.

“I really do not know whether it’s Comelec chair, whether it’s senator or whatever else or maybe going to private life or private sector, it’s also an option. Let’s see. There’s still a lot of work that needs to be done,” she added.

Comelec? No thanks, says De Lima