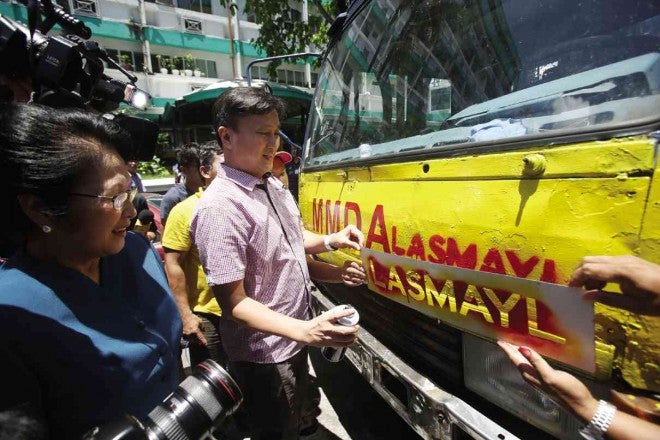 If you see this word on a cargo truck, it means it’s on a special trip for a delivery long overdue.

In another government effort to decongest the ports and undo the effects of the expanded truck ban imposed by the city government of Manila since February, the so-called “last mile’’ project will start this Monday and run till Sept. 22—and it won’t be easy for the riding public.

The two-week measure is expected to worsen traffic but will allow an estimated 3,000 trucks to move cargo that had long piled up at the ports and bring them finally to their warehouses. They can do so even during the hours covered by the truck ban not only in Manila but in other cities.

The selected trucks will be marked with stickers and the word “Lasmayl’’ so they won’t be flagged down by traffic marshals, according to the Metropolitan Manila Development Authority (MMDA).

It was the latest solution to be devised as the port congestion problem—which business groups blame on the truck ban in Manila—has become a major concern even for Malacañang. In another truck-related measure, the MMDA recently restricted cargo haulers to only a single lane on C5 Road to help ease traffic flow on the thoroughfare.

In a briefing Friday with the traffic bureaus of various local government units, MMDA Chair Francis Tolentino said the initiative was made upon the request of importers, exporters and truckers during a recent Cabinet cluster meeting to solve the port congestion. “They asked us to allow them to complete the ‘last mile’ of their journey,’’ he said.

Tolentino noted that even though trucks can use 24/7 “express trade lanes” on Roxas Boulevard and Quirino Avenue, many could still not complete their deliveries because of the truck ban in other cities in Metro Manila.

But he clarified that the “last mile” project would not be applicable on Edsa where a total truck ban is strictly observed, and also on España Boulevard (from Quezon Boulevard to Rotonda), Ortigas Avenue (from Santolan to Sta. Lucia), Katipunan Avenue (from Santolan to Commonwealth), Recto Avenue (from A. Santos to Legarda), Taft Avenue, and other roads in business districts such as Ayala in Makati City and Bonifacio Global City in Taguig.

These roads will still observe the existing MMDA truck ban that prohibits trucks and vehicles with a gross capacity weight of more than 4,500 kilos from 6 a.m. to 10 a.m. and from 5 p.m. to 10 p.m. every day except Sundays and holidays.

Starting Sunday, the MMDA will mark trucks coming from the ports to identify those that could take last-mile trips. Truckers who will operate without the proper stickers or those not cleared for the trips will be fined P5,000.

The MMDA chair conceded that the measure would further aggravate traffic for the next two weeks, but said it was necessary in view of the expected arrival of fresh shipments as the holiday season draws near. It would also help avert the harsher economic effects of port congestion and the delayed movement of goods, such as price increases, he added.