Ely Pamatong out on bail 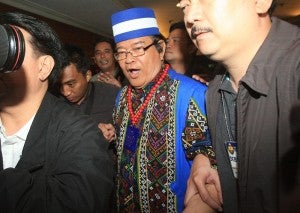 MANILA, Philippines—Two days after his arrest, Atty. Ely Pamatong, the alleged mastermind on the foiled attack at the Ninoy Aquino International Airport (Naia) was temporarily released after posting bail before the Quezon City court.

NBI Director Virgilio Mendez, in a phone call Friday confirmed that Pamatong posted a P2,000-bail for malicious mischief and P12,000 for inciting to sedition for scattering metal spikes in EDSA in 2004.

“We have no choice but to release him. He is facing a bailable offense,” Mendez said.

Pamatong admitted that he is the head of the USA Freedom Fighters of the East (Usaffe), the group that was supposed to set off an improvised incendiary device inside the Naia Terminal 3 early Monday morning.

After his release noontime Friday, Pamatong visited the three who were arrested at Naia 3 including Grandeur Guerrero, whom he said is one of his trusted aides.

The NBI is still conducting an investigation on the extent of Pamatong’s involvement in the planned attack at the airport and Chinese operated establishments.