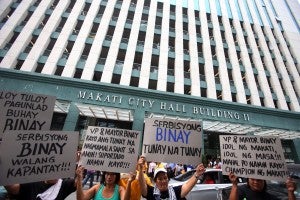 MANILA, Philippines–None of the experts who inspected Makati City Hall Building II with a Senate panel on Monday categorically said the edifice was overpriced.

“The experts did not say the building was overpriced, which is the issue being investigated by the Senate,” said Makati City government spokesman Lito Anzures on Tuesday.

Anzures was present during the inspection conducted by the Senate blue ribbon committee chaired by Sen. Aquilino Pimentel III, with Sen. Antonio Trillanes IV as the only other member who came.

The experts tapped by the committee, however, said the building was not world-class, having walls of gypsum board and rolled linoleum floors.

But Anzures countered that these “pop-up experts” were not the ones who would determine if there was an overprice or criminal liability, only the courts [would do that].

“Random and piecemeal assessments made by engineers, architects and quantity surveyors tapped by the Senate are not conclusive and, therefore, cannot be used to validate alleged overprice. It is only the courts that can determine overprice and criminal liability on the basis of evidence presented and the testimonies of all parties involved,” Anzures said.

He was confident the plunder charges against Makati Mayor Junjun Binay and his father, Vice President Jejomar Binay, would be dismissed since the city government “fully complied” with the Procurement Act in the construction of the building.

Citing the reviews conducted by the Commission on Audit (COA), Anzures noted the contract amounts in the project phases were all “reasonable.”

“The COA consistently found the contract amounts and costs to be reasonable and within allowable limits of variance pursuant to COA Resolution No. 91-52,” Anzures said.

The Makati building is the subject of the plunder complaint filed against the Binays by former city officials Renato Bondal and Nicolas Enciso IV for alleged overprice after the construction ended up costing P2.3 billion.

Mayor Binay explained the cost by saying the 11-story city hall extension was “world-class” and a “green building.”

Anzures said the data from the National Statistics Office the complainants used to come up with the purported lower cost and market appraisals “cannot categorically prove” overprice in the building construction.

“The Davis Langdon and Seah Handbook cannot categorically prove the building is overpriced, nor can the ocular inspection of the building,” he said.

Sen. Alan Peter Cayetano referred to the handbook when questioning witnesses about the building in an earlier committee hearing.