MANILA, Philippines–President Aquino got justice when the justice committee of the House of Representatives voted an identical 54-4 on all three impeachment complaints against him for insufficiency of substance, Malacañang said on Tuesday.

With the lopsided voting, the first threat to unseat Aquino passed.

“Note that the group that heard the impeachment complaint is called the committee on justice. So, if that was the decision of the committee of justice, perhaps we can say that that was the outcome of the process,” Communications Secretary Herminio Coloma said in a statement.

Dinagat Rep. Kaka Bag-ao said the committee should answer three questions in making its decision: “Is there a need to defend the public from the President? Is he a big obstacle in the development of this country? Should we deny him the one-and-half years to continue his reforms?”

She said she did not believe there was enough basis to impeach the President even though some of his attempts at reform might not have followed the letter of the law.

The committee, chaired by Iloilo Rep. Niel Tupas Jr., on Tuesday dismissed each of the three complaints after a four-hour debate that involved testy exchanges between Aquino’s allies and critics.

A heckling incident ensued after a student leader in the audience, one of the complainants, shouted “shame on you” in the middle of voting on the third complaint.

He was escorted out of the room, along with other members of militant organizations who began chanting anti-Aquino slogans.

“This is a terrible day for the Filipino people,” Bayan Muna Rep. Neri Colmenares, who endorsed the first impeachment complaint, told the committee after an unsuccessful attempt to stop the voting.

Earlier, Colmenares said the lawmakers who endorsed the complaints should be given more time to explain and defend the impeachment complaints, the first ones to be filed against Aquino for culpable violation of the Constitution, graft and corruption, and betrayal of public trust.

But Tupas was prevailed upon by the Liberal Party-dominated committee to begin voting on the complaints, which last week passed the first test of sufficiency in form.

An impeachment complaint first needs to satisfy requirements on sufficiency in form and substance before it can be judged whether it has sufficient grounds and if there is probable cause. A majority vote is needed each time.

All three impeachment complaints were endorsed by members of the militant Makabayan bloc and filed by their allies. Vastly outnumbered in the justice committee, and even more so in the 290-member House, they were not able to muster support from other members of the minority.

Their first two complaints were lodged in connection with the Disbursement Acceleration Program (DAP), which the Supreme Court declared unconstitutional in July.

The third was related to the Enhanced Defense Cooperation Agreement (Edca) allowing the US military greater access to Filipino bases nationwide. 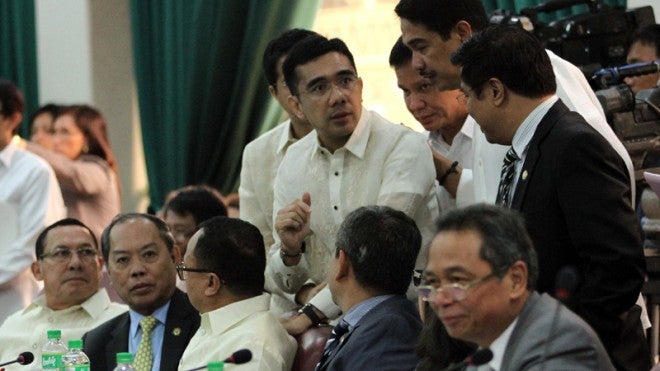 BY THE NUMBERS By a vote of 54-4 on each of three impeachment complaints, the House justice committee, chaired by Iloilo Rep. Niel Tupas, rejects first attempts to unseat President Aquino. LYN RILLON

The DAP is the subject of a pending motion for reconsideration in the Supreme Court. The high court has yet to resolve petitions questioning the constitutionality of Edca.

But Tupas repeatedly stressed that the justice committee held the power to decide the sufficiency of the complaints without regard for pending actions in the Supreme Court.

In defending the sufficiency of substance of the first complaint, Colmenares said Aquino must answer for the P144 billion used under the DAP stimulus program in 2011, 2012 and 2013.

He said the complaint was based not only on the Supreme Court decision declaring the DAP unconstitutional, but also on memorandums and circulars issued by the government with respect to the stimulus program.

The program allowed the executive to declare savings before the end of the year, use standby appropriations and realign these for other projects not included in the national budget passed by Congress.

“These are heavy and serious violations of the constitutional provision that ‘No money shall be paid out of the treasury except in pursuance of an appropriation made by law,’” Colmenares said.

“Mr. Aquino knowingly and intentionally violated the law prohibiting transfer of appropriation, according to the definition of savings under the law, in cross-border augmentation, and spending not covered by budget. For three years, he repeatedly continued this violation involving billions of pesos in funds,” he said.

The debate centered on whether Aquino’s purported offenses were of such a nature that justified removing him from office with more than one-and-a-half years to go.

Cagayan de Oro Rep. Rufus Rodriguez said impeaching a President must involve a serious offense that “strikes at the very heart of the nation,” and whose matter of commission must be of the same severity as treason or bribery.

He said he saw no perversity in Aquino’s actions.

But Colmenares said there was perversity in the President’s act of “stealing” Congress’ power of the purse when he realigned savings for projects not listed in the appropriations law.

On the other hand, Deputy Speaker Giorgidi Aggabao said the committee must exercise “strict and exacting standards for the removal of a popular President.

“Is the offense charges so profoundly serious, so malevolent to the Constitution … that it justifies undoing the vote of some 15 million Filipinos?” he said.

This argument prompted Alliance of Concerned Teachers Rep. Antonio Tinio to remind the committee of the “most popular” former President Joseph Estrada, who was impeached by the House before his ouster through a people power uprising in 2001.

“There’s no basis. The number of votes provides the President no protection against impeachment. The basis should be whether there was violation of the Constitution, the law and his sworn duty,” he said.

The debate turned personal when Eastern Samar Rep. Ben Evardone brought up DAP funds that purportedly went to Colmenares for some of his projects.

Colmenares quickly denied receiving funds under the DAP, adding that it should not be considered hypocrisy for lawmakers who received the DAP to denounce it.

In the same way, he said, no one should denounce politicians like Evardone “for switching from [the camp of former President Gloria Macapagal-] Arroyo to Aquino.”

At this point, Tupas called a suspension of the proceedings and later moved to strike out Evardone’s and Colmenares’ remarks due to their irrelevant and personal nature.

On the third complaint involving Edca, Tinio said Aquino practically surrendered Philippine sovereignty to the Americans when he authorized the agreement, which he described as allowing US bases “rent-free and tax-free” in “agreed locations” anywhere in the Philippines. 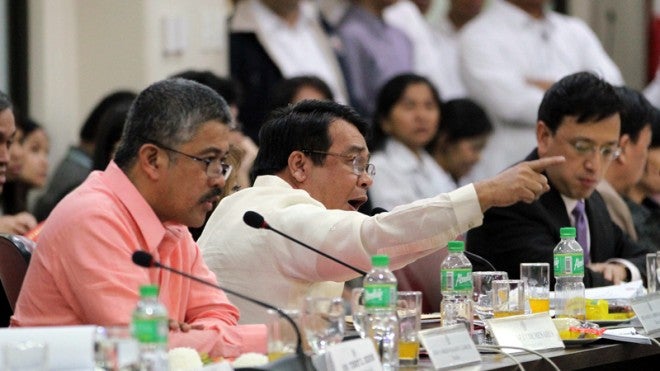 Gabriela Rep. Emmi de Jesus said that under the agreement, it was conceivable for the United States to occupy Camp Crame or Camp Aguinaldo, Ninoy Aquino International Airport, Quezon Memorial Circle and even private subdivisions for military purposes.

“These are not just scary scenarios. To prove that this is not just a figment of our imagination, read the 10 pages of Edca. It contains provisions that are so outrageous,” she said.

But Cavite Rep. Elpidio Barzaga Jr. argued that external relations were within the powers of the President.

Barzaga cited a Supreme Court ruling that by their voluntary act, nations may “waive” part of their sovereignty for some reciprocal undertaking with another country without violating the Constitution or amounting to the diminution of sovereignty.

To which Tinio replied: “Precisely what we’re saying is that [Edca is] only an executive agreement signed by the alter ego of the President surrendering sovereignty, without even submitting it to Congress to let it decide if it’s justifiable.”

There was also tussling over the role of Edca in the regional power play between China and the United States.

But Bayan Muna Rep. Carlos Zarate said: “China has practically invaded Spratlys but what has the US done about it? It doesn’t say anywhere in Edca that the US will help us against China.”

Eventually, the committee moved to put each of the impeachment complaints to a vote in spite of objections from the Makabayan lawmakers.

Just before the voting on the third complaint was completed, and when the results became clear, Einstein Recedes, chair of the National Union of Students of the Philippines, suddenly stood up and shouted “Shame on you!”

Other members of groups allied with the Makabayan bloc brought out sheets of paper with antigovernment slogans, including “Stop yellow dictatorship,” and began chanting.

House security quickly clamped down on the activists, grabbing their protest materials and escorting them out of the room.

The committee members did not acknowledge the protesters and adjourned without ceremony.–With a report from Christian Esguerra