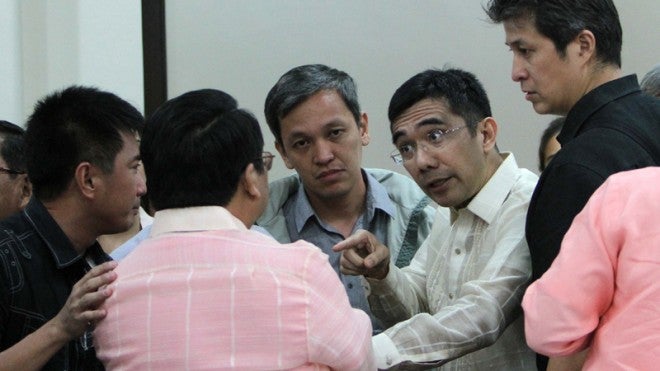 MANILA, Philippines–The three impeachment complaints against President Aquino passed the first hurdle on Tuesday after these were found to be sufficient in form by the justice committee of the House of Representatives in spite of some technical defects.

Administration lawmakers said they exercised the “spirit of liberalism” in ruling favorably on the impeachment complaints, the first ones to be filed against Aquino for culpable violation of the Constitution, graft and corruption, and betrayal of public trust.

The committee chaired by Iloilo Rep. Niel Tupas Jr. voted 53-1, with one abstention, and 42-7, with four abstentions, in favor of the sufficiency of form of the first two impeachment complaints. The body approved the third complaint unanimously.

At a news briefing, Communications Secretary Herminio Coloma said Malacañang was prepared for whatever the outcome of the impeachment complaints.

“According to our laws, [the House of Representatives] is the branch of government with jurisdiction over this. Let us just wait for their decision,” Coloma said of Congress which is dominated by Aquino’s political allies.

Members of the justice committee agreed to overlook certain deficiencies, which could be considered “not fatal,” such as the names of organizations appearing in the endorsement sheet instead of individual complainants in the first complaint, and the lack of documents properly verifying the identities of the complainants in the second.

All three impeachment complaints were endorsed by members of the Makabayan opposition bloc and filed by their allies.

The first two complaints were filed in connection with the Disbursement Acceleration Program (DAP), which the Supreme Court declared unconstitutional in July, while the third was related to the Enhanced Defense Cooperation Agreement (Edca) allowing the US military greater access to Filipino bases nationwide.

The DAP and Edca issues are subjects of motions for reconsideration in the Supreme Court.

A fourth impeachment complaint filed by Alliance of Concerned Teachers Rep. Antonio Tinio accusing Aquino of continuing the pork barrel system was considered submitted late and not referred to the committee for action.

In the initial round of deliberations, Ilocos Norte Rep. Rodolfo Fariñas, vice chair of the committee, pointed out that the first set of complainants had signed the complaint in their individual capacities and not on behalf of their organizations.

For example, Bagong Alyansang Makabayan (Bayan) secretary general Renato Reyes signed the complaint as “I, Renato Reyes,” and not on behalf of Bayan.

But the resolutions of Bayan Muna Representatives Neri Colmenares and Carlos Zarate, Anakpawis Rep. Fernando Hicap and Gabriela Rep. Luz Ilagan endorsed the complaint of “Bayan,” and not “Reyes,” meaning they were endorsing an impeachment complaint filed by a “nonexistent party,” Fariñas said.

Fariñas then proposed that the complainants be allowed to correct the error “in the spirit of liberalism” in a motion received generally favorably by the body, whose members included several lawmakers in the ruling Liberal Party (LP).

But Colmenares, the senior deputy minority leader, did not appear to appreciate the gesture.

He said the complaint should be considered sufficient in form “as it is,” since the endorsement sheet clearly was referring only to the impeachment complaint it was attached to.

“We believe that the endorsement resolution is valid as it is, because the essence of the act is not the letters… What if we made a mistake in the spelling? Would the impeachment complaint be considered insufficient in form?” he said.

In the end, the committee voted in favor of the sufficiency of form of the complaint “as amended.”

Human rights lawyer Edre Olalia, a counsel of the first set of complainants, said it was not a case of the administration party giving them favors.

“As far as the counsels are concerned, there were no favors. They stole [our] thunder to make it appear they were giving us a favor. This is not a favor to the Filipino people. This is a duty on the part of the committee to look beyond these trivial, trifling details,” he told reporters.

On the second complaint, Cagayan de Oro Rep. Rufus Rodriguez objected to the lack of identification documents of the complainants.

He noted that under the rules of court, the complainants should have provided supporting documents proving their identities, such as a driver’s license, a Professional Regulation Commission ID, a National Bureau of Investigation clearance, or a police clearance.

Rodriguez said these requirements were satisfied by the first and third sets of complainants, but “in the second complaint, there is none.”

At this point, some LP members were feeling less liberal, arguing that the opposition was being given too much leeway.

Eastern Samar Rep. Ben Evardone said: “While we in the LP exercise liberalism… impeachment is a very important case. We’re impeaching no less than the President, the highest official of the land.

“Earlier, we gave you leeway… can we do that for every complainant? I think we should not set a bad precedent. We should follow rules because we’re impeaching no less than the President,” he said.

Akbayan Rep. Barry Gutierrez proposed a “way out” for the minority. He said under the rules, verification of the identity of the complainants could be accomplished by having the endorser, Kabataan Rep. Terry Ridon, vouch personally for the identities of the 15 complainants.

Explaining his “no” vote, Iloilo City Rep. Jerry Treñas wondered why the majority was being too lenient.

This prompted a rejoinder from Tupas, who said: “This is an impeachment complaint. We should not trivialize this proceeding.”

An impeachment complaint is considered sufficient in form if it satisfies the documentary requirements such as the verification and signatures of the complainants, and the signatures of the endorsing lawmakers in the resolution of endorsement.

Tupas, an administration ally who served as lead prosecutor in the impeachment of then Chief Justice Renato Corona in 2012, said he believed this was the “most crucial stage” for any impeachment complaint.

“Once it passes sufficiency of substance… you can order respondents to answer all sorts of questions. I think the most crucial here is next hearing on the substance of the impeachment complaints,” he told reporters after the hearing.

Once an impeachment complaint meets the requirement on substance, it will then be judged on whether it has sufficient grounds and if there is probable cause.

Speaking to reporters after the hearing, Tupas said the “liberalism” shown by most of the administration lawmakers was not a party decision.

“In fact, we were willing to vote. If there was a disagreement, let’s vote, and as you saw, an overwhelming majority decided it was sufficient in form,” he said.

Tupas said he expected that the deliberations on sufficiency of form would be “too technical.”

“We already expected points to be raised, which is why there was a motion to be liberal on the interpretation of rules on form in the interest of justice… That’s how fair the committee was, which is why the discussions became intense,” he said.

The vote on sufficiency of substance would be a different matter, Tupas said. “In sufficiency on substance, it won’t be pure technicality. It will depend on the individual conscience of the members,” he said.–With a report from Nikko Dizon; Marc Jayson Cayabyab, INQUIRER.net

Apostol moves to junk to other impeachment raps vs Aquino