MANILA, Philippines – Senator  Grace  Poe  thumbed down  on Tuesday  a “Poe-Kiko” tandem, saying in jest that its  double-meaning may only anger various sectors, including Davao City Mayor Rodrigo Duterte. 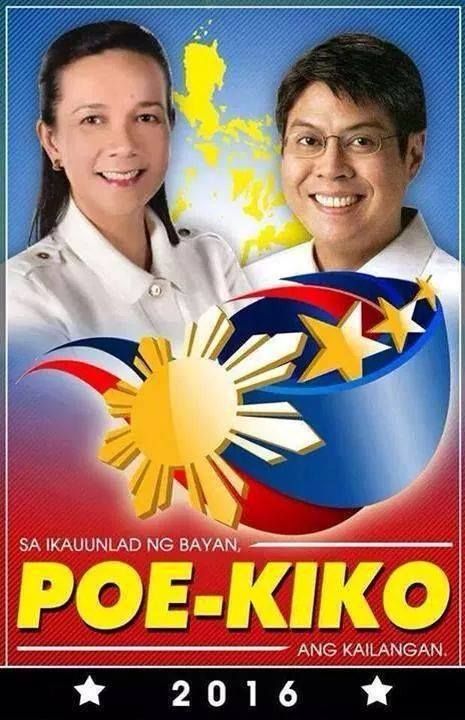 The image of a mock ‘Poe-Kiko’ poster that has been making its way around the net. Origin unknown.

(Oh my. You naughty people, you know very well Mayor Duterte will get mad once he hears these words with double meaning.)

Meanwhile, a mock poster of “Poe-Kiko” running in tandem for the 2016 presidential election surfaced on the Web recently. The person who uploaded the image remains anonymous.

(At the MTRCB, that thing is not encouraged and I even can’t help but have a laugh.)

MTRCB is Movie and Television Review and Classification  Board, which  the senator used to head  before she ran for the Senate.

Turning serious, Poe said a “Poe-Kiko” tandem was far-fetched  considering that they had never been together before.

(Perhaps that is impossible, because first he has no plan to run for public office…and I don’t have any plan either. So let’s leave it that way.)

Poe maintained that she has no plans in 2016, saying she has a lot more to prove since she has been in the Senate for only a year.

(I am contented to have the privilege to serve, contribute for change…So it will take time before I could prove my mettle.)