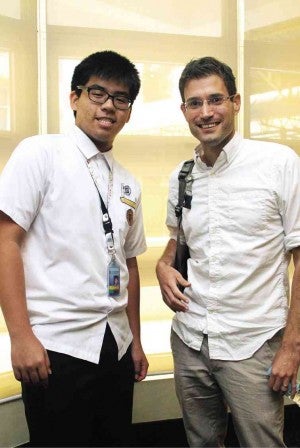 “I have a confession,” the lanky, bespectacled man on the stage told us. “When I was a kid, I hated books.” The crowd of Grade 8 students in Xavier School’s auditorium gasped collectively.

“I never read books for fun and I avoided my school novels as best as I could,” he continued. As our tentative laughter turned to hearty applause and even a couple of standing ovations, teachers tried their best to hide their consternation.

The speaker, after all, was Alex London, a best-selling journalist-turned-author.

To this day, London remains the mad storyteller. As he regaled us with stories of his childhood, he constantly gesticulated, his legs propelling him back, front, side; his words a passionate and unstoppable torrent.

When London was young, he refused to read drab and wordy books. Instead, he got his fix of exhilarating stories by tagging along with the X-Men on their technicolor comics adventures or blasting his way out of an alien-inhabited Nintendo world.

London wrote his first book, “Lawrence and Luther Lizard Go to Camp,” based on his experiences at a camp. He and his friend were the main characters (lizards). London painstakingly scribbled the words and drew the pictures, stapled the pages together and presented “the only copy in the world” to his mother.

London often gave his friends a barrage of fictitious yet hilarious tales. His teachers did not appreciate the raucous laughter that ensued and London spent much time in the principal’s office. As punishment, his parents took away his comics and video games, but his love of telling stories trumped everything.

One day, the principal called for both his parents and all his teachers to confront him about his misbehavior. At that moment, London realized how much power words could wield.

“If telling stories could make all the adults in my life take time out from their busy schedules just to get me in trouble,”  London said, “then stories are dangerous. They can change the way people think, the way they see the world.”

When he was a child drearily washing dishes, London often wished there was someone who could do that tedious chore for him. Years later, as the adult London was inundated with credit card bills, he realized it was so easy to get into a lot of debt.

Soon London juxtaposed the two ideas together: What if people became so debt-ridden that they had no choice but to suffer on another’s behalf? His most popular novel, “Proxy,” was born.

In a dystopian world ruled by corporations, citizens’ social rankings depend on their credit-worthiness. The poor ones in debt serve as proxies, who receive punishment in their wealthy patrons’ stead when the latter misbehave. When rich kid Knox kills someone in a car accident, his proxy Syd is sentenced to death. To escape the evil forces that conspire against them both, the two must overcome their differences and work together.

“When I was a journalist, I developed the skill of capturing a person’s voice in a few lines,” London said. “Writing fiction is the same, except I’m capturing the voice of an imaginary person.”

London the journalist traveled to refugee camps and war zones to get to know people; today, London the novelist inhabits his characters—“thinking, talking, living” like them for days on end.

The characters in “Proxy” set the book apart from other dystopian novels that have saturated young adult fiction, post-“Hunger Games.”  The lead characters are not archetypes (Strong Female Lead! Walking Comic Relief! Bodacious Vampire!); they sound distinct and human.

A sequel, “Guardian,” has just come out. Though London remained coy about the book (“I don’t want to spoil it”), it is as riveting as the first. Unexpected twists arise because the consequences of the characters’ previous choices haunt them still.

Students peppered London with questions. How did companies take over the world?  Answer:  “I leave it to your imagination but, in my view, global warming is a large factor. A government collapses and companies take over.” Is a proxy allowed to have his own proxy? Answer: “If he had the money to pay for it.”

And, of course, the big one: What would YOU do if you had your own proxy?  Answer: “Nothing. I like to think I’m a good guy.”

On that fateful day in the principal’s office, London realized that the books he had been avoiding were powerful. He started reading history and biographies and soon immersed himself in the writing world.

“In movies or TV, the world is built for you by someone else,” London said. “But from a single book, different people create different universes. The one that you create for yourself is yours—and only yours.”

London’s books, “Proxy” and “Guardian,” are available at National Book Store and Powerbooks.

(Scott Lee-Chua is a junior at Xavier High School.  His books, “Top Ten Travels” in Manila, Cebu and Davao, were finalists in the 2012 National Book Awards. E-mail the author at