Abaya can do ice bucket challenge inside MRT but…

MANILA, Philippines –While he can take the “MRT Rush Hour Challenge” or even the ice bucket  challenge  inside the MRT at the same time, Transportation  Secretary  Joseph Emilio  Abaya said doing  both would not help ease  the problems of commuting public.

“Actually, walang problema. Ang tanong ko lang dyan, by riding  the train or in fact mag-ice challenge ako sa MRT 3 train na rush hour,  do I solve the problem by  doing that? Do I?”   Abaya said in an interview at the Senate when asked about the  MRT challenge for  government officials.

“Parang I could make a clown of myself but at the end of the day, yung sumasakay ba sa MRT3 matutuwa na nagbuhos ako ng yelo sa MRT-3? I don’t think so. Tingin ko maiinis lang sila…” he said.

Even  before the MRT challenge,  Abaya  rode the  MRT3 last week,  but he was blasted by netizens who said it was only a publicity stunt. They challenged Abaya to ride the MRT during rush hour sans media. 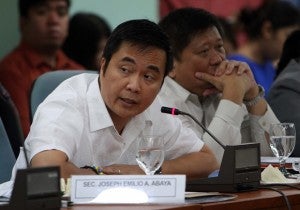 Abaya defended his MRT ride, saying  he also wanted to be low-key  about it  but some  members of the media learned about his plan.

“Andito ba yung sumama sa media…Ask him, did I direct him to ride with me? Did I?  In fact I wanted a low-key way of doing  it. That’s my personality. Yun lang, matitinik mga kaibigan nyo…” he  said.

Despite  the comparison between him and Poe,  Abaya said he did not feel bad about knowing that he was doing  his job.

He said he rode the MRT to check its safety and to show this to the  riding  public.

“My learning experience in MRT3 is not based on  that single ride,”  Abaya said, adding that he  was in constant  communication with the MRT officials to check on the trains  and  the  commuters.