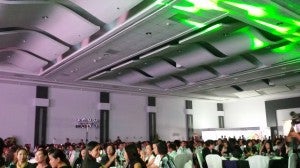 Attendees of the 5th National Young Hoteliers and Restaurateurs Power Conference while waiting for the program to start. Image by Janine Villagracia/INQUIRER.net.

MANILA, Philippines—“Never stop learning” — this was the core message of the 5th National Young Hoteliers and Restaurateurs Power Conference (NYHRPC) held August 27 at the SMX Convention Center in Pasay City.

The convention, themed “Filipino hospitality beyond borders,” gathered around 1,000 Tourism and Hospitality Management students from over 20 universities across the country.

In the convention’s six-hour run, much was said and shared by the speakers of the event. 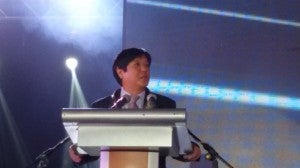 Senator Ferdinand “Bong-Bong” Marcos Jr. was first to take the stage. In his speech, he highlighted the “indispensable” role of hotels and restaurants in the country’s tourism. “Saan nga naman matutulog o kakain ang ating mga turista (Where will the tourists sleep and eat?)?” he said in support of his claim that tourism is dependent on hotel and restaurant hospitality.

In 2012 alone, the senator shared that 29% of the tourists’ budget was spent on accommodation, and another 26% went to food and drinks. And in 2013, each foreign tourist approximately spent Php43,000 during their stay in the country, while domestic tourists had around Php1,500 to Php12,000 at their disposal, each.

But the story of progress doesn’t stop there. Marcos added that the tourism industry continues to showcase growth in its year per year performance.

The senator believes that if the government works on improving the country’s infrastructures and services, the Philippines can and may become a key player in the global tourism scene. 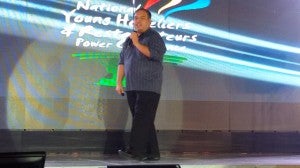 Ryan Sebastian of the Department of Tourism. Image by Janine Villagracia/INQUIRER.net.

After Senator Marcos, Ryan Sebastian of the Department of Tourism’s (DOT) Office of Product Research and Development introduced to future hoteliers and restaurateurs DOT’s efforts in synchronizing the country’s tourism campaigns.

Then, next to claim the spotlight was Council of Hotel and Restaurant Educators of the Philippines (COHREP) Executive Director for Planning and Development, Ma. Christina Aquino.

Through a traditional “get a piece of paper and number it one to eleven” quiz, Aquino gauged the audience’s level of awareness about the Asean and its provisions. Surprisingly, roughly 1% of the convention’s crowd passed the test. 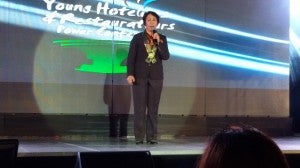 Ma. Christina Aquino, Executive Director for Planning and Development of the Council of Hotel and Restaurant Educators of the Philippines. Image by Janine Villagracia/INQUIRER.net.

When Aquino ended her speech, the academician encouraged her listeners to improve their awareness and involvement in the Asean’s MRA as this greatly affects the tourism industry in the country. “We have the smile, but we must remain competitive,” she added.

When the fourth speaker, Miss Universe 2010 4th Runner-up Venus Raj, went up on stage, the discussion took a 180-degree turn. From being academic and economic, it shifted to being personal and inspirational.

Raj helped the crowd realize that aside from technical knowhow, understanding and knowing well one’s own identity is vital in becoming the country’s forerunner in the tourism and hospitality industry.

Personally, Raj puts premium on assessing her own strengths and weaknesses. The beauty queen believes that by knowing these, she can work on self-improvement better because it is by acknowledging her capabilities and shortcomings that she can open doors for more learning. 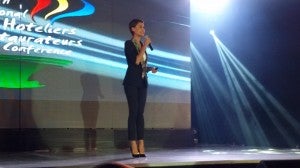 “By accepting that we are not the best, we can be the best,” the beauty queen-turned-TV personality said.

When Raj ended her speech, a man, fair in height—and with a wig—was welcomed on stage, then the next thing we knew, the function hall was filled with screams and squeals.

The organizers of the convention surely knew how to have fun. The intermission which was plainly labelled “Break/Intermission” in the program was actually a MYX ambush. 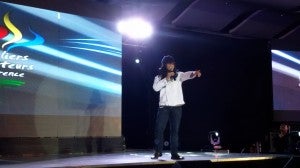 MYX ambush is a show on a local music channel where celebrities disguise as an eccentric individual, and then they mingle with the crowd of the chosen location for the episode.

This time around, the audience were treated to a gag “chef skit” and two song numbers by no less than actor JM de Guzman.

The hoteliers and restaurateurs-to-be forgot for a while that they were in an academic activity. Girls screamed their loudest, especially when de Guzman pulled off his sweet, hand-kissing antics to one of the attendees.

When the actor finally bid the crowd goodbye, the hype settled down, and then the convention proceeded to the next half which is the Torque Show.

In this part of the conference, the students were given tips by experts from the hotel and restaurant management industry. Frank Reyes of Reyes Barbecue, cake designer Marjorie Tong, and celebrity chef Bruce Lim were the guests for this year. 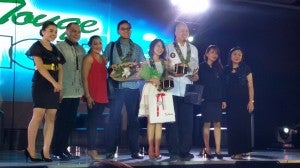 While most people were probably expecting to hear stories of immediate success from the professionals, they found out that the experiences of the experts were otherwise.

Tong said that it took her a while to land a job after she graduated, but that didn’t frustrate her because she later realized that the entire application stage is still part of the learning process, while chef Bruce Lim confessed that there came a point when he had to transfer from one school to another. Whether the reason was grade or deportment related, he didn’t disclose anymore, but seeing his stature now, students were really encouraged to give school their best shot.

The three speakers said it truly takes passion to succeed in the field they are in. It’s not about the schools where aspiring hoteliers and restaurateurs graduated from, they said. “It’s about how you interpret the knowledge [you have], and what you do with it,” explained Lim.

Asked to give a final message to the crowd, the three advised the young hopefuls to “never stop learning every day,” and to not be scared of failures. “What doesn’t kill you makes you stronger,” Lim added. 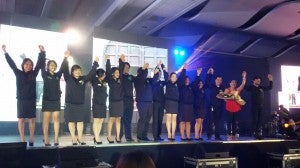 Seeing how the chemistry of the speakers for the 5th NYHRPC went, it becomes apparent why the young hoteliers and restaurateurs of today are in good hands with the annual convention. More than theories and concepts, the conference provides students a better look on the reality of their chosen field.

The 5th NYHRPC was organized by the College of Tourism and Hospitality Management of the De La Salle University, Dasmariñas campus