US airstrikes and aid for Iraqi town under siege | Inquirer News

US airstrikes and aid for Iraqi town under siege 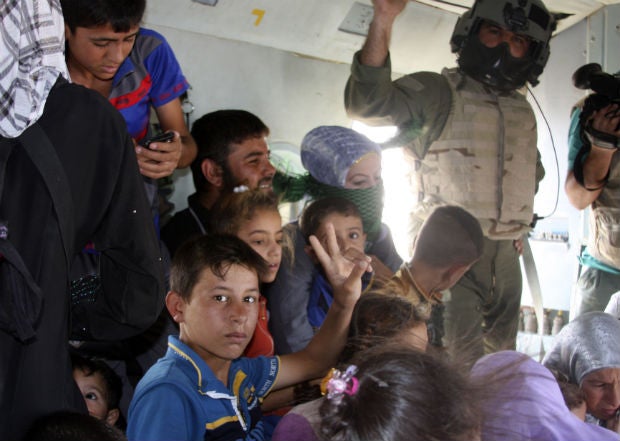 Iraqi Shiite Turkmens, mostly women and children, evacuate the town of Amirli on board an Iraqi Army helicopter aid flight bringing in supplies to Amirli, a town that has been completely surrounded by militants with the Islamic State group since mid-July, some 105 miles (170 kilometers) north of Baghdad, Iraq, Saturday, Aug. 30, 2014. AP

WASHINGTON — An international airdrop of food and water supported by U.S. airstrikes sought to bring relief to the beleaguered Iraqi town of Amirli, which has been under siege by Islamic State militants for nearly two months, the Pentagon said Saturday night.

Aircraft from Australia, France and Britain joined the U.S. in delivering the aid to thousands of Shiite Turkmen in the farming community about 105 miles (170 kilometers) north of Baghdad, Pentagon press secretary Rear Adm. John Kirby said in a statement. The aid came at the request of the Iraqi government, he said.

The U.S. military conducted the airstrikes against Islamic State militants to support the aid delivery, Kirby said. Operations will be limited in scope and duration as needed to address the humanitarian crisis in Amirli and protect the civilians trapped in the town, he said.

Instead of fleeing in the face of the Islamic State drive across northern Iraq, the Shiite Turkmens have stayed and fortified their town of 15,000 with trenches and armed positions.

While Amirli fought off the initial attack in June, it has been surrounded by the militants since mid-July. Some residents have said that the Iraqi military’s efforts to fly in food, water and other aid have not been enough amid oppressive heat, lack of electrical power — the town’s power station was destroyed weeks ago — and shelling from the militants.

U.S. airstrikes in Iraq, which began earlier this month, have targeted Islamic State militants attacking Yazidi Iraqis on Mount Sinjar and the militant forces operating in the vicinity of Ibril and Mosul Dam. The beleaguered Yazidis received several humanitarian drops of tons of food and water as well as military support aimed at protecting them.

Earlier Saturday, U.S. Central Command said five more airstrikes had taken place against Islamic State militants near Mosul Dam. Those attacks, carried out by fighter aircraft and unmanned drones, brought to 115 the total number of airstrikes across Iraq since Aug. 8.