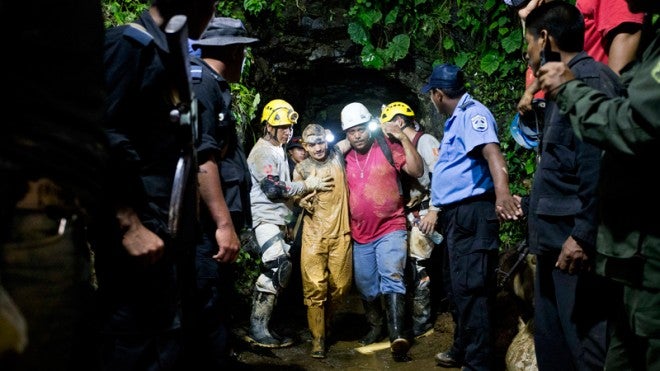 A rescued miner is accompanied by emergency responders as he leaves on his own feet the entrance to the El Comal gold and silver mine in Bonanza, Nicaragua, Friday, Aug. 29, 2014. At least 20 freelance gold miners trapped by a collapse in a mine have been rescued and crews were working early Saturday to free more, officials said. (AP Photo/Esteban Felix)

MANAGUA, Nicaragua – Rescuers in Nicaragua on Friday rescued alive 20 miners who had been trapped deep underground for more than 24 hours after a cave-in at an unlicensed gold mine, but five more workers were still missing.

“We give thanks to God our Lord and the Virgin Mary for having saved from death 20 artisanal miners,” First Lady Rosario Murillo, the government’s official spokeswoman, told reporters.

Murillo said five miners had “not surfaced” and rescue crews were still working to locate them.

“Hopefully we can find them in the coming hours,” she said.

The miners were pulled out one at a time using a pulley system installed late Friday near the pit where they had been trapped.

The miners, mostly younger than 30, were “pretty tired, exhausted, dehydrated, muddy and dirty,” an Agence France-Presse photographer on the scene said.

They were immediately embraced by family members, who had stayed nearby since the accident.

There had been 28 “guiriseros,” or informal gold miners, working in the shaft early Thursday when the mouth of the mine caved in because of a landslide triggered by heavy downpours.