Kerry calls for ‘coalition of nations’ in fighting IS 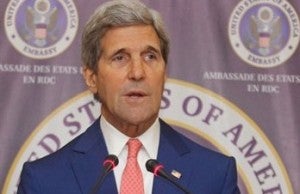 One week ahead of a Nato summit in Wales that will gather leaders from across the Western world, Kerry advocated “a united response led by the United States and the broadest possible coalition of nations” in an op-ed in the New York Times.

The top US diplomat said he and Secretary of Defense Chuck Hagel would “meet with our counterparts from our European allies. The goal is to enlist the broadest possible assistance,” on the sidelines of the Nato summit.

US President Barack Obama has said he is still developing a comprehensive plan to defeat IS, which has overrun large swathes of Iraq and Syria, where it has declared a “caliphate” and unleashed a spate of atrocities.

In his column, Kerry said that Obama will put forward a plan for dealing with IS at a summit meeting of the UN Security Council in September, when the US holds the group’s rotating presidency.

“We will use that opportunity to continue to build a broad coalition and highlight the danger posed by foreign terrorist fighters, including those who have joined ISIS,” Kerry said, using an alternate acronym for the jihadist group.

Following the Nato summit, he said he and Hagel would travel to the Middle East to build support “among the countries that are most directly threatened.”

“The cancer of ISIS will not be allowed to spread to other countries. The world can confront this scourge, and ultimately defeat it,” Kerry added.

The Nato summit in Wales runs from September 4-5.