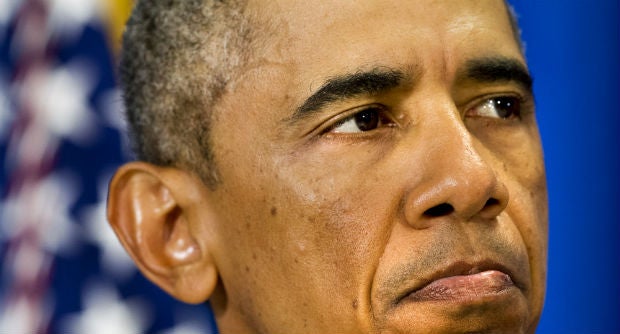 U.S President Barack Obama pauses as he speaks about the killing of journalist James Foley in Syria during a statement in Edgartown, Mass., Wednesday, Aug. 20, 2014. The president said the U.S. will continue to confront Islamic State extremists despite Foley’s brutal murder. AP

WASHINGTON — The United States stood firm Wednesday in its fight with Islamic State group militants who beheaded a U.S. journalist in Iraq, pledging to continue attacking the group despite its threats to kill another American hostage. The U.S. military continued its airstrikes against the group as President Barack Obama denounced the group as a “cancer” threatening the entire region.

“We will be vigilant and we will be relentless,” Obama said.

The execution of James Foley drew international condemnation. Germany announced it would supply the Kurds in Iraq with weapons to fight the insurgents. Italy’s defense minister said the country hopes to contribute machine guns, ammunition and anti-tank rockets. French Foreign Minister Laurent Fabius said the killing showed the true face of this “caliphate of barbarism.”

In capitals across the Middle East, by contrast, the news of Foley’s death was met with silence, even in Syria and Iraq, the two countries where the Islamic State is strongest. On social media, people in the region condemned Foley’s killing, but stressed that the Islamic State has been committing atrocities against Iraqis and Syrians for years.

The journalist’s parents, Diane and John Foley, spoke to reporters, and Diane Foley said her son was courageous to the end and called his death “just evil.”

Obama’s remarks affirmed that the U.S. would not scale back its military posture in Iraq in response to Foley’s killing. And at the State Department, spokeswoman Marie Harf did not rule out military operations in Syria to bring those responsible to justice, saying the U.S. “reserves the right to hold people accountable when they harm Americans. What that looks like going forward, those conversations will be happening.”

Since the video was released Tuesday, the U.S. military has conducted 14 airstrikes on Islamic State targets. And on Wednesday, U.S. officials said military planners were considering the possibility of sending a small number of additional troops to Iraq, mainly to provide additional security around Baghdad.

The president said he’d told Foley’s family in a phone call Wednesday that the United States joins them in honoring all that Foley did, praising the journalist for his work telling the story of the crisis in Syria, where Foley was captured in 2012. “Jim Foley’s life stands in stark contrast to his killers,” Obama said. He spoke from Martha’s Vineyard in Massachusetts, where the president is on vacation.

Foley, 40, went missing in northern Syria in November 2012 while freelancing for Agence France-Presse and the Boston-based media company GlobalPost. The car he was riding in was stopped by four militants in a contested battle zone that both Sunni rebel fighters and government forces were trying to control. He had not been heard from since.

The beheading marks the first time the Islamic State has killed an American citizen since the Syrian conflict broke out in March 2011, upping the stakes in an increasingly chaotic and multilayered war. The killing is likely to complicate U.S. involvement in Iraq and the Obama administration’s efforts to contain the group as it expands in both Iraq and Syria.

The group is the heir apparent of the militancy known as al-Qaida in Iraq, which beheaded many of its victims, including American businessman Nicholas Berg in 2004.

The video released on websites Tuesday appears to show the increasing sophistication of the Islamic State group’s media unit and begins with scenes of Obama explaining his decision to order airstrikes.

It then cuts to Foley, kneeling in the desert, next to a black-clad militant with a knife to his throat. After the captive speaks, the militant is shown apparently beginning to cut at his neck; the video fades to black before the beheading is completed. The next shot shows the captive lying dead. The video appears to have been shot in an arid area; there is no vegetation to be seen and the horizon is in the distance where the sand meets the gray-blue sky.

At the end of the video, a militant shows a second man, who was identified as another American journalist, Steven Sotloff, and warns that he could be the next captive killed. Sotloff was kidnapped near the Syrian-Turkish border in August 2013; he had freelanced for Time, the National Interest and MediaLine.

Obama did not specifically mention Sotloff.

Since Aug. 8, there have been nearly 90 U.S. airstrikes in Iraq on Islamic State targets — including security checkpoints, vehicles and weapons caches. It’s not clear how many militants have been killed in the strikes, although it’s likely that some were.

The New York-based Committee to Protect Journalists says more than 80 journalists have been abducted in Syria, and estimates that around 20 are currently missing there. It has not released their nationalities. In its annual report in November, the committee described the widespread seizure of journalists as unprecedented and largely unreported by news organizations in the hope that keeping the kidnappings out of public view may help in the captives’ release.