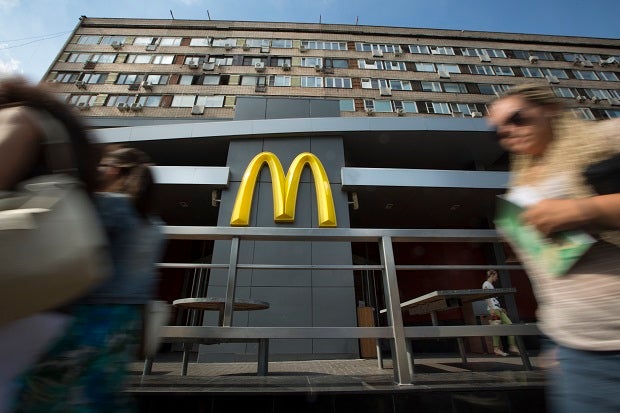 People walk past the oldest of Moscow’s McDonald’s outlets which was opened on Jan. 31, 1990, and closed on Thursday, Aug. 21, 2014. Russian news agencies reported Thursday that the country’s food safety agency will conduct checks on McDonald’s restaurants in the Urals following food safety complaints, a day after four branches of the chain were shuttered in Moscow. AP/Alexander Zemlianichenko

MOSCOW – Russia has temporarily closed 12 branches of McDonald’s on health grounds and is carrying out more than 100 inspections, the US fast food chain said Friday.

Russia has cracked down on McDonald’s this month, closing three other branches of the hugely popular burger chain over alleged hygiene violations in a move widely seen as a retaliation against Western sanctions over Ukraine.

McDonald’s said in a statement that 12 restaurants have now been closed by the authorities, seven of them in southern Russia, and “currently more than 100 inspections are being carried out”.

The company said it is looking at the alleged violations to work out how to reopen the restaurants as soon as possible.

Courts on Wednesday ordered three branches closed for the maximum period of three months on health grounds, including two in central Moscow, in decisions that McDonald’s said it would appeal.

In the latest development, a spokesman for Russia’s food safety agency in the central Yaroslav region, cited by the RIA-Novosti news agency, said that E. coli, some strains of which can cause serious food poisoning, had been found in iceberg lettuce in one restaurant.

McDonald’s has over 400 restaurants in Russia with more than 37,000 employees. It opened the first in central Moscow during the late Soviet era, attracting giant queues of customers eager to try US fast food for the first time.

While ostensibly for health reasons, the move against McDonald’s came close on the heels of the West ratcheting up sanctions on Moscow for its role in the Ukraine crisis — and Russia banning most US and EU food imports in retaliation.

Russia has a long history of using sudden food safety concerns as a political weapon against unfriendly states.

While McDonald’s is a symbol of American culture, the company has made huge efforts to build up its local supply chain and says it buys 85 percent of the food it serves in Russia inside the country.