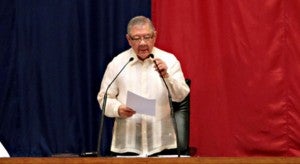 MANILA—President Aquino’s statement that he is not inclined to seek a second term has practically killed the prospects of any constitutional amendment to lift the ban on presidential reelection, House Speaker Feliciano Belmonte Jr. said Friday.

“It should put that kind of talk to rest,” he said in a text message.

Belmonte said there was now “no need” for the Liberal Party to discuss proposed amendments to some political provisions of the Constitution, after days of speculation fueled by Mr. Aquino’s earlier pronouncement in a television interview that he was open to the idea of another term.

But Mr. Aquino’s statement in a subsequent radio interview that he was looking forward to the end of his term should be construed as a signal to his party mates to stop pushing for Charter change, the House leader said.

The Liberal Party has been divided on the issue of amending the Constitution’s outside of provisions regarding the economy.

Belmonte, who is strongly pushing for amendments of the economic provisions of the 1987 Constitution, belongs to the group that is against term extension, having pledged in the past not to touch the Charter’s political sections.

Some members of the administration party, including Caloocan Rep. Edgar Erice and Eastern Samar Rep. Ben Evardone, however, have expressed support for giving Mr. Aquino another term.

But Erice said the Liberal Party still had not arrived at a consensus on the matter.

“No LP stand on political amendments. No caucus yet,” he said in a text message.