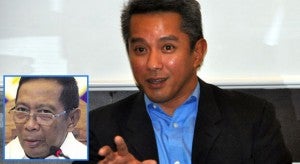 MANILA, Philippines–The new spokesman of Vice President Jejomar Binay on Thursday said he had been helping with preparations for the latter’s 2016 presidential run for almost two years now and the campaign would be something to reckon with.

According to Cavite Gov. Jonvic Remulla, Binay “is ready to campaign, ready to win and ready to govern.”

Remulla, of the Nacionalista Party (NP), said he had been helping the campaign with research and policy formation.

But before going to work for Binay, he said he obtained the blessing of NP president, former Sen. Manuel Villar Jr.

This after Remulla said he was told by Villar that he had no plans of running for president in 2016.

Remulla said he would visit Villar soon to tell him that he was now going to speak for Binay.

“I had only told (Villar) that I was going to help in the campaign but not as a spokesperson,” said Remulla in a phone interview.

The governor said this was because he learned only three weeks ago that he was going to be Binay’s spokesman.

Asked if he would resign from the NP once Binay’s new party is created, Remulla said there was no party yet. He said that in the event the NP would align with the new party of Binay there would be no need for him to resign.

Remulla said his joining the Binay camp as spokesman was timely as the political attacks against the Vice President had intensified, particularly accusations that he and his family had made money from Makati City projects, including the new P2.2-billion Makati City parking building.

Previously, it was either Navotas City Rep. Toby Tiangco, secretary general of the opposition United Nationalist Alliance headed by Binay, or the Vice President’s communication manager Joey Salgado who spoke for Binay on issues.

This is why the “defense and offense” moves for Binay should be “put in high gear,” said Remulla, describing the need to put out Binay’s message at this time to be “very crucial.”

“We have to calibrate the message already,” he said.