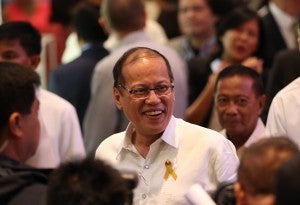 MANILA, Philippines – President Benigno Aquino III on Thursday expressed support for the Anti-Dynasty Bill, which seeks to stop members of the same family from wielding too much political power.

(I am also in favor of the bill, especially because having one family in an area where they control everything – economic, political, sometimes also judicial and security sector– may make it difficult to have free and honest elections.)

He said the Anti-Dynasty Bill has already been moving in Congress with Speaker Feliciano Belmonte saying he is in favor of it.

However, Aquino said the public should also realize that politicians should be pitied.

(If you are a politician, your rights should be reduced, the scrutiny is higher. If you are able to maintain a good name, for politicians, it is frowned upon and may be called a dynasty.)

On the other hand, he said children following the professions of their parents are not criticized.

(For example in medicine, if your doctor retires and his child inherits the profession, you go to his child.)

In the end, Aquino said what was important was that an Anti-Dynasty bill was being pushed in Congress and that it will expand and serve as the enabling law of the constitutional provision against political dynasties.

(When they approve that bill, I will be very ready to sign that into law.)