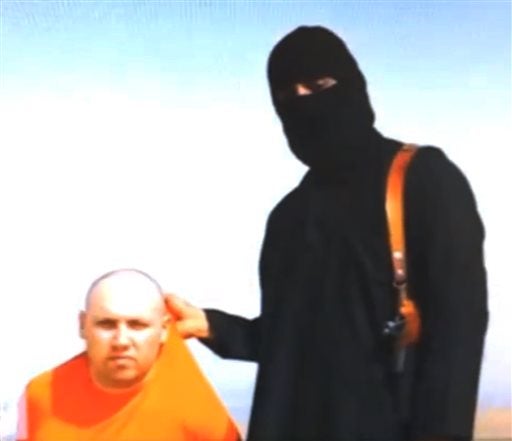 This still image from an undated video released by Islamic State militants on Tuesday, Aug. 19, 2014, purports to show journalist Steven Sotloff being held by the militant group. AP

MIAMI — An American freelance journalist held hostage and threatened with death by Islamic militants wanted to tell the world through his writing about oppressed people in the Middle East, his mother said in a video.

Steven Sotloff, 31, was last seen in August 2013 in Syria. He was threatened with death by Islamic State militants on a video released last week unless the US stopped air strikes on the group in Iraq. The same video showed the beheading of fellow American journalist James Foley.

In her video released Wednesday, Shirley Sotloff, who lives in the Miami area, appealed to her son’s captors to have mercy on a man sympathetic to the suffering of Muslims. “He is an honorable man and has always tried to help the weak,” she said.

The new video marked the first detailed public comments the family has made since Steven Sotloff went missing. Several US officials, including Republican Congresswoman Ileana Ros-Lehtinen, say they have been working behind the scenes to find out more about him and try to secure his release.

“This is a tragic situation and we have seen that (the Islamic State group) has no respect for human life,” Ros-Lehtinen said.

At the White House, spokesman Josh Earnest told reporters he did not know whether President Barack Obama had seen Shirley Sotloff’s video, but he said the administration is “deeply engaged” in trying to gain release of all Americans held hostage in the Middle East.

“She obviously, as is evident from the video, feels desperate about the safety and well-being of her son, and understandably so, and that is why our thoughts and prayers are with Mr. Sotloff’s family at this very difficult and trying time.”

On his Twitter feed, Sotloff described himself as a “stand-up philosopher from Miami. Currently in Libya.”

Before Sotloff was shown on the Islamic State video, only a few friends and family knew he had been taken hostage, said Sotloff’s former roommate at the University of Central Florida, Emerson Lotzia. His parents didn’t want anyone to go public. Lotzia said he recently spoke to Sotloff’s father, Arthur Sotloff.

“He was in the best of spirits, then he was in the worst of spirits,” said Lotzia, now a local TV sports anchor in West Palm Beach. “He told me, ‘At last I know my son is alive. But look at the situation.’ It’s killing him, and he’s trying his best to stay on an even keel.” 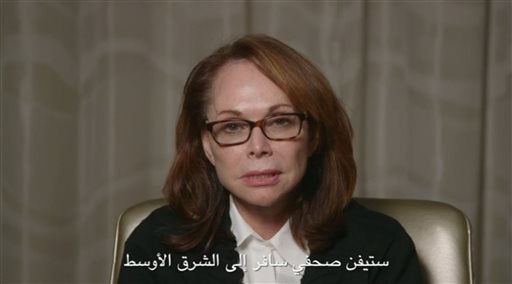 In this image made from video obtained on Wednesday, Aug. 27, 2014, Shirley Sotloff, who lives in Florida, appeals to the captors of her son, freelance journalist Steven Sotloff, 31, who was last seen in Syria in August 2013. AP

Just how Sotloff made his way from Florida to Middle East hotspots is not clear. But Lotzia told the UCF student newspaper, the Central Florida Future, that Sotloff was doing what he loved.

“A million people could have told him what he was doing was foolish, it seemed like it to us (as) outsiders looking in, but to him it was what he loved to do and you weren’t going to stop him,” Lotzia said. “Steve said it was scary over there. It was dangerous. It wasn’t safe to be over there. He knew it. He kept going back.”

According to a society notice in The Miami Herald’s archives, Sotloff graduated from Kimball Union Academy in New Hampshire in May 2002 and began attending the University of Central Florida that fall. The notice says Sotloff was co-editor of the student newspaper, The Kimball Union, and received an award for student journalism.

UCF spokeswoman Zenaida Gonzalez Kotala said school records show Sotloff was a student majoring in journalism from fall 2002 until fall 2004. She said the school has no record of him graduating.

UCF student newspaper archives show Sotloff wrote frequently for the publication on topics ranging from presidential politics to a fire at a campus-affiliated apartment complex.

More recently, Sotloff published articles from Syria, Egypt and Libya in a variety of publications, including Time.com, the World Affairs Journal and Foreign Policy. He posted links to many of them on his Twitter feed, and several focus on the plight of average people in war-torn places such as Aleppo, Syria.

James Denton, publisher and editor in chief of World Affairs, said Sotloff was an occasional and well-regarded contributor.

“He is known to us as an honest and thoughtful journalist who strives to understand the story from local perspectives and report his findings straightforwardly,” Denton said in an email statement. “He is certainly courageous.”

Aside from the Middle East, Sotloff’s Twitter feed shows he was a big fan of the NBA’s Miami Heat.

“Is it bad that I want to focus on #syria, but all I can think of is a #HEATFinals repeat?” he tweeted in June 2013 before the team won its second consecutive title.

US service to mourn journalist slain by militants