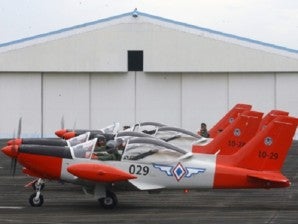 MANILA, Philippines – The Philippine Air Force has just completed the acquisition of 18 brand new basic trainer aircraft which will improve the capability of the PAF to train its pilots.

The presentation of the aircraft was led by PAF Commanding General Oscar H. Rabena Thursday during the 12th founding anniversary of the Air Education and Training Command in San Fernando Airbase, Lipa City, Batangas, it said.

The latest acquisition of 18 units of basic trainer aircraft for the country’s military aviation is a “modest modernization” for the country’s air force and a big boost for its capability to train its pilots, the PAF said.

“The planes would improve the training curriculum for pilot training and will enhance and develop pilots professionally and keep them up to date with the changing times and advancements of technology in accordance with the PAF’s thrusts in contributing to peace and development in the country,” it said.

The same trainer aircraft is used by 27 military organizations, professional flying schools and private establishments worldwide. The SF-260 trainer aircraft has been used by the PAF since the early 70’s, it said.

Training for the pilots in the SF-260FH includes performing advanced aerobatic techniques and high-speed maneuvers. The aircraft is designed for speed and agility and is designed to be fully aerobatic. This will give trainees experience in handling advanced aircrafts, the PAF said.

The designer and manufacturer of the SF-260, Alenia Aermacchi, is based in Italy. The aircraft were assembled in the Philippines through Aermacchi’s local partner, AEROTECH Industries Philippines, Inc. in Clarkfield, Pampanga.