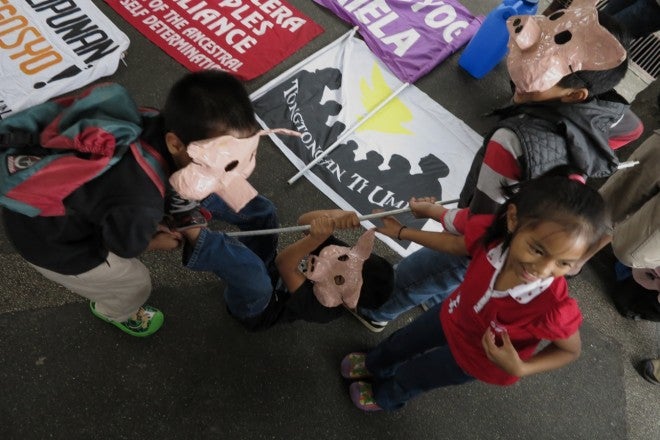 Baguio children, who took part in the Baguio leg of the Abolish Pork Barrel Movement, pretended to be roasted pigs (lechon) while their parents tried to persuade people to sign up for a people’s initiative to ban the pork barrel. EV ESPIRITU/INQUIRER NORTHERN LUZON

BAGUIO CITY, Philippines – A group of activists launched the summer capital’s version of the “abolish pork” movement, aiming to gather signatures of the more than 150,000 voters here, as the city’s contribution to a people’s initiative for a law banning the pork barrel in the national budget.

For the initiative to prosper, proponents need to get the signatures of 3 percent of all voters in each district nationwide to sign up, said Tracy Dumalo, secretary-general of the Tongtongan ti Umili, which sponsored the signature campaign at the Malcolm Square in downtown Baguio.

A local artist who joined the protest urged Baguio residents to sign up for the people’s initiative with a poem that explained why this kind of pork needed to be cut out of Filipinos’ lives.

Children of the activists also performed songs during the signature gathering program.

The children also wore pig masks and played on the sidelines of the program. At one point, they pretended to be roasted pigs, surprising onlookers.

No anti-pork protests were reported in major cities and urban centers in northern and central Luzon on Monday.