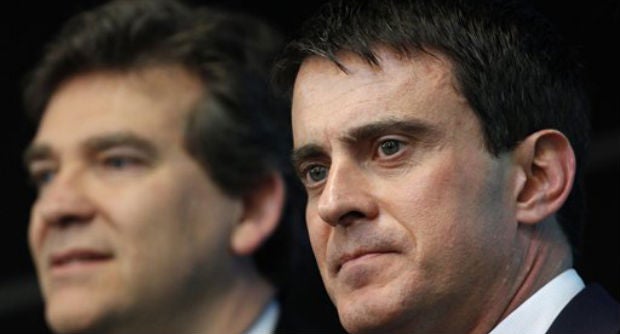 This April 10, 2014, shows French prime minister Manuel Valls, right, and Economy Minister Arnaud Montebourg during a visit to French defense and electronic company Thales in Gennevilliers, outside Paris, France. French President Francois Hollande is dissolving the government after an open feud in his Cabinet over the country’s economy. Prime Minister Manuel Valls offered up his Socialist government’s resignation Monday after accusing his economy minister, Arnaud Montebourg , of crossing a line with open criticism of the government’s policies. AP

PARIS, France ― French President Francois Hollande dissolved the government on Monday after an open feud in his Cabinet over the country’s stagnant economy.

Prime Minister Manuel Valls offered up his Socialist government’s resignation after accusing the economy minister of crossing a line with his blunt criticism of the government’s policies. Hollande accepted the resignation and ordered Valls to form a new government by Tuesday.

France has had effectively no economic growth this year and Hollande’s approval ratings are in the teens. The country is under pressure from the European Union to get its finances in order, but Economy Minister Arnaud Montebourg has questioned whether the austerity pressed by the EU will kick start French growth.

“A major change in our economy policy,” was what Montebourg had said was needed from the president and prime minister.

With those words, Montebourg drew the anger of the Socialist leadership, which said Montebourg’s job was to support the government, not criticize it from within.

“He’s not there to start a debate but to put France back on the path of growth,” Carlos Da Silva, the Socialist Party spokesman, told Le Figaro newspaper.