Protesters seek 6M signatures to kill pork once and for all 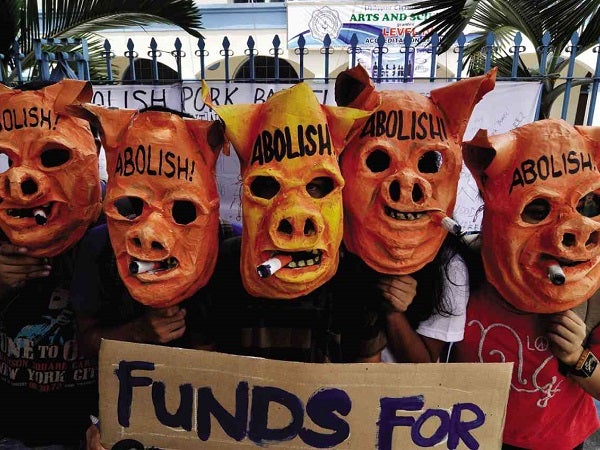 Looking properly porcine, young activists push for the abolition of the graft-swamped pork barrel during a protest rally along Taft Avenue in Manila. RICHARD A. REYES/INQUIRER FILE PHOTO

MANILA, Philippines–There are still many things to be angry about a year after the massive protest against the pork barrel at Rizal Park in Manila.

As a result of that protest, President Aquino stopped disbursements from the graft-ridden Priority Development Assistance Fund (PDAF), a pork barrel from which lawmakers and businesswoman Janet Lim-Napoles allegedly embezzled P10 billion.

But critics of the Aquino administration say the pork barrel lives on, and the same forces behind last year’s Million People March are coming together again Monday to try to really kill the controversial PDAF, which the Supreme Court declared unconstitutional last year.

The Abolish Pork Movement will launch a campaign to gather 6 million signatures for a people’s initiative to pass a law that would ban lump sums in the national budget.

The groups will also protest moves to amend the Constitution to lift the presidential term limit and enable Aquino to run for a second term.

They will also protest the efforts of Malacañang and its allies in Congress to scrap the Judiciary Development Fund (JDF) in retaliation for the Supreme Court’s striking down Aquino’s economic stimulus plan, the Disbursement Acceleration Program (DAP), on July 1.

The protest groups believe the Aquino administration and its congressional allies have created the JDF and constitutional amendment controversies to distract the public from the pork barrel scandal.

Silvestre said the investigation of the pork barrel scam had netted only opposition politicians, while Aquino’s allies implicated in the scandal had not been called to account.

And despite the Supreme Court ruling striking down the PDAF and the DAP, the Aquino administration strives to keep the pork barrel system intact, he said.

In an earlier interview, Silvestre said the Aquino administration tried to keep the system, and cited ACT Teachers Rep. Antonio Tinio’s disclosure on Aug. 11 of purported audio recordings of discussions in a House appropriations committee closed session confirming the restoration in this year’s budget of P20.7 billion in pork deleted from last year’s budget after the abolition of the PDAF.

The protesters also consider the DAP a pork barrel, as it was open for discretionary spending and used for projects not identified in the budget.

They say funds pooled through the DAP were also used for lawmakers’ pet projects.

Funds for discretionary spending need to be eliminated because they fuel patronage politics, Silvestre said.

“We need to eliminate patronage politics because this has fueled dynasties, all of these [traditional politicians], from the start,” he added.

That the pork barrel funds went to worthy causes is not the point, Silvestre said. The point is why the funds have to pass through politicians instead of going directly to the agencies that will implement the projects, he said.

Silvestre also said the organization could not ignore the talk of term extension for Aquino because it was likely a ploy for the President to evade accountability for his actions.

Renato Reyes of Bagong Alyansang Makabayan (Bayan), a member of the Abolish Pork Movement, also said his group could not ignore the talk of Charter change as well as the attempts to abolish the JDF because these were being used to draw attention away from the continued existence of the pork barrel.

Congress’ efforts to interfere with the JDF could also have an impact on the administration’s pending motion for reconsideration of the Supreme Court’s adverse ruling on the DAP, Reyes said.

“We don’t want the DAP ruling overturned because of what they are doing,” he said.

More than 20 tents will be pitched at Rizal Park on Monday, representing the different municipalities and cities in Metro Manila and nearby provinces, for people who want to sign the people’s initiative bill.

The groups behind the people’s initiative campaign are taking the signature drive across the country to gather 10 million signatures, or nearly double the required minimum.

Bayan Muna Rep. Neri Colmenares said the People’s Congress would put up “signature stations” in schools, public markets, churches and town plazas across the country through coordinating committees in the provinces.

In an interview with dzBB radio’s Rowena Salvacion, Colmenares said that after the Visayas leg was launched in Cebu on Saturday, the Luzon leg would kick off Monday, to be followed by Mindanao, either in Cagayan de Oro or Davao, within the week.

“We are targeting up to 10 million signatures to have a buffer because many things could happen, the Comelec (Commission on Elections) might remove some of the signatures. By Dec. 31, the last day of this year, we hope to get the minimum 10 percent (of voters) plus buffer. At least 1 million buffer is good enough for me,” Colmenares said.

With 52 million voters registered in the 2010 elections and at least 200,000 voters added since then, the group has pegged the compliance rate at 6 million signatures.

“We have to do this to prevent the redefinition of savings every time the GAA (General Appropriations Act) is filed. The insertion of lump sums or pork barrel in the budget will have a penalty of 6 years and one day to 10 years imprisonment and will make up for the lack of a law prohibiting pork barrel,” Colmenares said. “This is the cleansing process we need to [remove] the tradition of political patronage.”

He cited clandestine attempts by the administration to strike deals with lawmakers to continue the allocation of funds for their projects in the budget even after the Supreme Court had declared the PDAF unconstitutional.

“This trial of the [pork barrel scam] senators could take at least five years. If this bill is passed, you don’t need too many documents or whistle-blowers because if one is caught inserting or approving pork barrel fund in the [budget] or intervened in the realignment of a project or choosing a contractor, the minimum will be six years imprisonment,” Colmenares said. “This is abolishing pork barrel, criminalizing pork barrel directly.”

He said his group had to resort to a people’s initiative to enact an antipork barrel law because Bayan Muna’s attempt to do it through legislation last year “never reached first base.”

“We are very fortunate that the 1987 Constitution allows for a people’s initiative if Congress refuses to pass a bill sought by [the people]. Even the President cannot veto this initiative,” he said.

He said the groups behind the people’s initiative would not bother asking the President to support the move because he had already declared his bias for retaining the pork barrel mentality.

“He probably needs the pork barrel because his candidates for 2016 are not doing so well,” Colmenares said.

Bayan urged the public to join the protest at Luneta Park Monday and sign to support the people’s initiative.

Read Next
ADMU’s Ateneo Assembly hosts 2nd “Face of the Nation” forum
EDITORS' PICK
UK’s Boris Johnson will resign, BBC reports
Unemployment rate up to 6% in May
Geek out at TOYCON 2022 powered by Smart Signature
High inflation: Your P1 is now worth only 87 centavos
High-risk pregnancy: Reducing your risk is in your hands
House energy committee chair Arroyo bats for cheap electricity
MOST READ
Suspect in grisly killing of missing woman in Bulacan arrested
Kim Atienza’s daughter flaunts bikini body in response to critics of her ‘revealing photos’
Japanese artist who created ‘Yu-Gi-Oh!’ found dead in the sea
UK PM quits as Conservative leader
Don't miss out on the latest news and information.