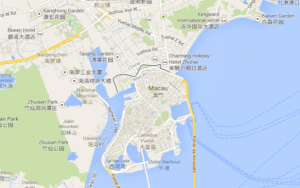 The former Portuguese colony returned to Chinese rule in 1999 and has a separate legal system from the mainland.

Like Hong Kong, Macau’s leader is known as its chief executive and is chosen by a pro-Beijing electoral committee.

The referendum will run for a week and ends on August 30 just ahead of the naming of the enclave’s new leader on August 31 by the 400-member committee. The poll was designed by activists to garner public support for reforms in the city of 550,000.

“Our goal is to fight for a democratic electoral system and the first stage is to get the citizens informed of the election system,” poll organizer Jason Chao told AFP last month when the event was announced.

“We hope that the referendum will be able to serve as a foundation for our fight for democracy in the future,” he said then.

Questions include whether there should be universal suffrage for the 2019 chief executive elections and how confident voters are in the upcoming election’s sole candidate Fernando Chui, who has been in the position since 2009.

Residents are asked to vote either electronically or at several locations in the city.

China has hit back at the referendum, with a statement from Beijing’s liaison office in the city saying that the enclave had “no authority” to hold the poll.

In May around 20,000 people marched against a bill to allow government ministers generous retirement packages, with many youngsters taking part hoping for greater accountability from their own government.

Hong Kong also held an informal poll on democratic reform in June which saw more than 790,000 people vote over 10 days on how the city’s next leader should be chosen.

The winning proposal would allow the public or democratically elected lawmaker to nominate candidates.

Beijing slammed the vote as “illegal and invalid”.

China has promised to let residents of the former British colony elect the chief executive in 2017, but has ruled out giving voters a say in selecting candidates, prompting fears that only those sympathetic to Beijing will be allowed to stand.