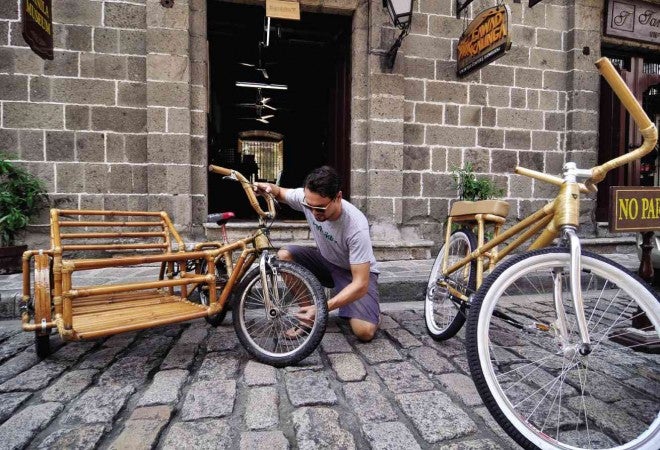 RIDES FOR A CAUSE The “bambikes” await their next tour customers at the Walled City. Take them for a spin, and you’ll help a Gawad Kalinga (GK) resettlement community in Tarlac province. RICHARD A. REYES

Here’s one way to go organic, get a history lesson and help support rural-based livelihood all at the same time.

Tourists can now explore Intramuros on “bambikes,” or bicycles whose frames are mostly made from bamboo and abaca fiber, which can be rented as part of a guided tour around the Spanish-era enclave in Manila.

The bambikes join the kalesa, all-terrain vehicles and Segways in offering rides around the Walled City. “(But) we don’t just do the touristy stuff. Of course, we go see the key spots like Manila Cathedral. But since our mode of transport is more flexible, we get to go in, out and even atop the Walled City,” McClelland said in an interview.

Jun Manaloto, a GK volunteer and caretaker of the village in Sitio Gripo, said he was approached by McClelland in 2009 when the bambikes founder was looking for workers in the area. First to be chosen were Cornelio Asuncion, 37, and Ferdinand Fernandez, 43, because of their past experience making bamboo handicraft like baskets and small chairs.

The work had given them new sources of income aside from farming, fishing and construction work. In the case of one worker, Fred Yusi, who was born with one leg shorter than the other, it was a welcome relief from having to drive a pedicab just to have some money in his pocket.

A community in need

A GK volunteer for the past seven years, McClelland said he chose the community in Victoria because it was among those that need the most help  in terms of livelihood opportunities. The village currently hosts 28 indigent families.

The bambuilders, who work six days a week, can finish up to 10 bike frames a month. All bambikes are handmade, with the frame fashioned from bamboo, the lugs or joints from abaca and resin, and the connection points from aircraft-grade aluminum—

The bambuilders earn P300 a day at the workshops. “With their past jobs, they were able to take home around P150-P200 a day, but they had to work the whole day under the sun. Now they are in a comfortable working environment with a fixed work schedule,” Manaloto said. They also receive benefits like membership in the Social Security System (SSS) and Pag-Ibig, plus a Christmas bonus.

While bambikes have been around since 2010, the Bambike Ecotours in Intramuros started only in April. A one-hour express tour option is also available for those who already have specific spots they want to visit. Regular tours cost P1,200 per person; express tours, P600.

McClelland said he thought of introducing bike tours in Manila because he couldn’t find anyone that offered it. “I’ve been on bike tours in other countries and I saw we didn’t have one here. With the bambike, I can use my global experience and give it a local flavor. When you go on a bambike tour, you are using something manufactured proudly in the Philippines, therefore supporting the local economy.”