How was a company whose business address was that of a small sari-sari (variety) store in an impoverished community able to supply the government with farm inputs worth more than P500 million?

This was among the startling revelations on Friday from a senior Commission on Audit (COA) official who conducted the special audit on the congressional pork barrel of detained Sen. Juan Ponce Enrile and more than 100 other legislators.

Among the shocking discoveries made by state auditors, she said, was that the office address of Nutrigrowth Inc., which supposedly supplied fertilizers bought with Enrile’s pork barrel allocations, turned out to be a small variety store at 949 Instruccion Street in Manila’s Sampaloc district. 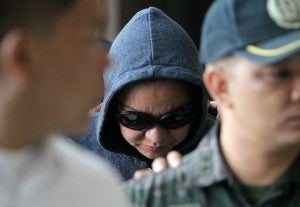 Nutrigrowth was identified as one of three suppliers that sold farm implements to six Napoles-linked foundations that were endorsed by Enrile’s office to carry out 14 livelihood projects to be financed by his pork barrel, officially known as the Priority Development Assistance Fund (PDAF).

“Nutrigrowth cannot be found at its given address. What they (COA auditors) were able to find was an existing sari-sari store,” Garcia said during the direct examination at the bail petition hearing of Napoles in the antigraft court’s Third Division.

Holding a copy of the COA report, special state prosecutor Anne Cabelis asked Garcia if she was referring to the small establishment shown in two photographs that were attached to the documents submitted by the Office of the Ombudsman as evidence.

When Garcia affirmed that it was the supposed business address of Nutrigrowth, Cabelis noted that the establishment displayed a piece of cardboard on which were written the words “Ice for Sale.”

“There were also tin cans and [glass] bottles,” Cabelis said, referring to the containers of candies and other small items found in the store.

In a previous testimony, principal whistle-blower Benhur Luy said Nutrigrowth was one of the dummy companies that Napoles had formed and used in the alleged operation to divert the lawmakers’ PDAF allocations.

Garcia noted that Ditchon Trading had declared in its business permit and other legal documents that its official business address was a house on Teresa Street in South City Homes, a middle-class subdivision in Biñan City, Laguna province.

The pink-colored house turned out to be Napoles’ former residence that she listed as her postal address when she registered JLN Corp. in April 1999 with the Securities and Exchange Commission.

“The physical existence and legal [personality] of these [entities] are questionable,” Garcia told the court.

The COA official also disclosed that two printing companies that printed the official receipts of MMRC and Masaganang Ani para sa Magsasaka Foundation Inc., said to be one of Napoles’ foundations, used the same authorization permit from the Bureau of Internal Revenue (BIR) as shown by the identical serial numbers on the bottom portion of the documents.

“That is impossible because the BIR issues only one authorization permit per receipt for a particular establishment,” Garcia said.

It was at this point that Associate Justice Samuel Martires, who has been consistent in grilling the prosecution witnesses on the nitty-gritty of government procurement processes, seemed to perk up.

Saying he found it difficult to follow Garcia’s explanation why the COA deemed the receipts with the same BIR permit anomalous, Martires asked if it was possible that the same permit number was issued by the BIR since the two booklets of official receipts were printed five years apart.

“No, it’s impossible, your honor, because the series is continuous. The guidelines of the BIR say there is only one permit per establishment,” Garcia said.

On further questioning, Garcia admitted to not having made an official report on the matter and failing to get an affidavit from the BIR official who, she claimed, had told her that such an occurrence was “impossible.”

She admitted that it was the COA’s policy to secure affidavits of resource persons interviewed by state auditors during special audits.

This prompted Martires to ask Garcia: “Why did you not comply with the requirement of the COA, Mrs. Garcia? Please educate me. I’m in a quagmire of my intellectual darkness.”

When the COA official replied that the issue was actually answered by the BIR guidelines, a copy of which she was able to get from the BIR, the justice told her: “Do you know why I’m asking these things? Because the cases in the Sandiganbayan were filed because of the COA audits and some of the [cases were projects] audited erroneously by [the] COA.”

“The poor accused have already been penalized because of the shame and anxiety that he or she had to endure. So you have to be careful because these are very sensitive cases not only concerning [the] PDAF. You should be very careful in conducting your audit,” Martires said.

“In the eyes of the people, there was a crime committed. If the court acquits the accused because of the failure of the COA audit, the court will become the antagonist and [the] COA will be the hero. Have pity on the justices if that would happen,” Martires said.