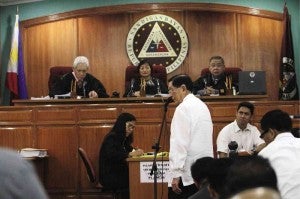 MANILA, Philippines—The Sandiganbayan Third Division on Friday denied the appeal of Senator Juan Ponce-Enrile to lift the 90 day preventive suspension against him.

The court further said that the appeal is ‘pro-forma’ with the arguments a mere reiteration he raised in his opposition that deserved to be dismissed outright.

It added that the suspension is not a penalty but a mere preventive measure.

“It arises from the legal presumption that unless the accused is suspended, he may frustrate his prosecution or commit further acts of malfeasance or do both…” the court said.

The anti-graft court also reiterated that the information or charge sheet against Enrile is valid “thus, it behooved the court to issue the assailed preventive suspension order.”

“Preventive suspension [under the Plunder Law] is not an administrative measure. It is not an incident to an administrative proceeding but is an indispensable and mandatory consequence of accused Enrile’s criminal indictment under a valid information,” the anti-graft court further stated.

The anti-graft court, in its ruling asked the Senate to inform them within five days upon receipt of the ruling if the suspension order has been implemented.

The court further said that the suspension shall be automatically lifted upon the expiration of the 90 day period.