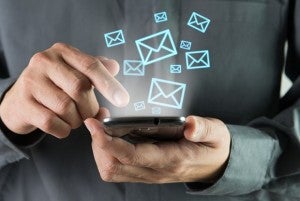 MANILA, Philippines – The Court of Appeals has stopped the National Telecommunications Commission (NTC) from enforcing an order to telecommunications firms to refund P7 billion in alleged “excess” charges on certain text messages and of reducing text messaging rates.

The 60-day restraining order shall take effect upon the payment of a P500,000 cash bond or approval of a surety bond application by the petitioner, the Digital Mobile Philippines Inc. (DMPI), according to the court’s sixth division dated August 20 and penned by Associate Justice Priscilla Baltazar-Padilla.

The appeals court also gave the NTC 10 days to show cause why the restraining order should not be made permanent.

The DMPI, which operates Sun Cellular, questioned the Nov. 20, 2012 decision by the NTC (NTC) that ordered the refund, and the subsequent May 7, 2014 NTC decision that denied the telcos’ motion for reconsideration (MR). It also questioned the validity of MC No. 02-10-2011 involving the interconnection charges on short message service (SMS).

DMPI, in its petition, said that if no restraining order would be issued, it would have to make individual computations of every amount due per subscriber based on the number of SMS sent to other networks plus determining if each and every subscriber availed of promos.

On the other hand, the DMPI said that while the memorandum circular (02-10-2011) sought to make SMS affordable, NTC has no power to make such issuances.

It pointed out MC No. 02-05-2008 classifying SMS as a value added service and was exempt from tariff regulations.

The appeals court, in issuing the restraining order, said “the recovery of the amounts to be disbursed by petitioner in favor of subscribers might be impossible in the event that the questioned NTC decision is set aside.”

“We agree with petitioner that there is no means for it to ascertain the existence of the subscribers and the identities of the actual users of the Mobile Identification Numbers as may be found in its system.”

“To our minds, justice would be better served if the implementation of the NTC decision is restrained at this stage of the proceeding…” the appeals court said.

The NTC issued the resolutions to penalize the telcos for violating the commission’s Memorandum Circular (MC) No. 02-10-2011 which ordered, among others, the reduction of the interconnection charge for SMS between two separate networks to a rate not higher than 15-centavos per SMS from its rate then of 35-centavos.

The decision was concurred in by Associate Justices Noel Tijam and Agnes Reyes-Carpio.

Aside from Digitel, Smart Communications Inc. and Globe Telecom Inc. also filed separate but similar petitions against the NTC.

Read Next
Quake hits northern Greece; no damage, injuries
EDITORS' PICK
San Mig Light celebrates its 20 years in Poblacion
No arrest yet of motorcycle taxis despite termination of pilot run
Senators think TWG’s move to axe motorcycle taxi pilot run an act of ‘revenge’
Ex-aide of Imelda Marcos is New York’s No. 2 tax cheat
‘A greener, cleaner tomorrow’: A how-to guide for Filipinos who want to help with today’s energy crisis
Motorcycle taxis ‘illegal’ starting next week — LTFRB board member
MOST READ
Palace: Crisis over ABS-CBN franchise unlikely
Motorcycle taxis ‘illegal’ starting next week — LTFRB board member
ALI bares facts on Technohub deal: P4B in lease to UP, P171, not P22, per square meter per month
Prince Harry: ‘Powerful media’ is why he’s stepping away
Don't miss out on the latest news and information.