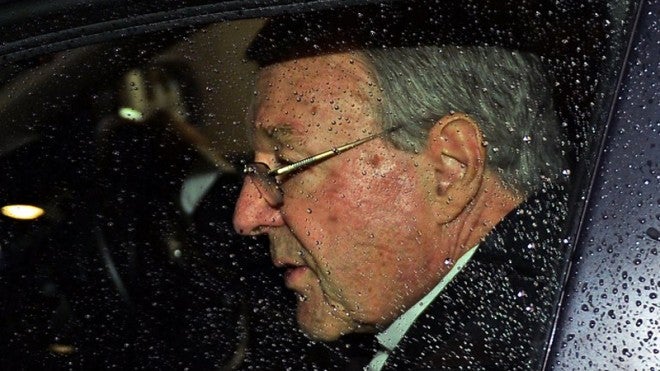 Australia’s Catholic Cardinal George Pell arrives to give evidence to a Royal Commission into Institutional Responses to Child Sexual Abuse in Australia, in Sydney on March 27, 2014. Pell, recently appointed by Pope Francis to head a new Vatican finance ministry, said that some in the Vatican once saw accusations of child sex abuse by priests as coming from “enemies of the church to make trouble”. AFP PHOTO/William WEST

Australia’s leading Catholic cleric George Pell, a top Vatican official, came under fire Friday after drawing an analogy between the church’s response to child abuse and a trucking company.

Cardinal Pell, a former archbishop of both Melbourne and Sydney before taking up a high-powered job this year as head of a new Vatican finance ministry after being handpicked by Pope Francis, made the comments Thursday.

He acknowledged to a Royal Commission into Institutional Responses to Child Sexual Abuse in Melbourne that the church had a moral obligation to the victims of pedophile priests.

But he suggested that when it came to its legal responsibility, the actions of its priests were not necessarily the fault of the church, citing the hypothetical example of a woman being molested by a truck driver.

“If the truck driver picks up some lady and then molests her, I don’t think it’s appropriate, because it is contrary to the policy, for the ownership, the leadership of that company to be held responsible,” he said via video link from Rome.

“If every precaution has been taken, no warning has been given, it is, I think, not appropriate for legal culpability to be foisted on the authority figure.”

The comments outraged support groups, who said Pell was displaying a lack of compassion for victims of abuse.

“His comments were outrageous,” Adults Surviving Child Abuse president Cathy Kezelman said, adding that he “continues to duck and weave” in trying to deny liability.

“To have their (victims’) experiences denied yet again drives a knife into the wound and twists it,” she said.

Nicky Davis, from the Survivors Network of Those Abused by Priests, told ABC radio it showed Pell was out of touch.

“It was a highly offensive comparison and showed that, at the end of the day, all he was concerned with was protecting himself and making excuses for behavior that is inexcusable.”

Earlier this year, in his last sermon before leaving Australia for the Holy See, Pell acknowledged priests, religious leaders and others linked to the church had abused those they were supposed to protect, and he apologized.

The Royal Commission is under way in Australia after a decade of growing pressure to investigate widespread allegations of pedophilia.

Its hearings have covered thousands of harrowing allegations of child abuse involving places of worship, orphanages, community groups and schools.

Pell is now one of the most important figures in the Catholic Church, charged with helping overhaul the Vatican’s much-criticized central administration following a wave of scandals.