Soldiers told: Keep support for Jovito Palparan to yourselves 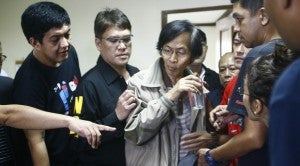 MANILA, Philippines – With colleagues offering words of support for retired Major General Jovito Palparan, the Armed Forces of the Philippines on Wednesday told its active force to keep their opinions to themselves.

Lieutenant Colonel Ramon Zagala, Public Affair Office Chief, said that as soldiers, they were barred from speaking out.

He added that if soldiers have their opinion on a certain issue they could only express it to their units, family or close friends and not to the public.

Or better yet, as Zagala said, to themselves.

On Friday, retired Lieutenant General Edilberto Adan, president of Association of Generals and Flag Officers, said that Palparan was a victim of trial by publicity and that he should be given a chance to defend himself in court.

Zagala said that once a soldier retired from service then he or she may enjoy the privileges of a civilian.

He added that the troops should respect the judicial system of the country as the case was in the courts and Palparan was still innocent unless proven otherwise.

“As soldiers we should respect the judiciary and we do not side with anyone except the Constitution.”