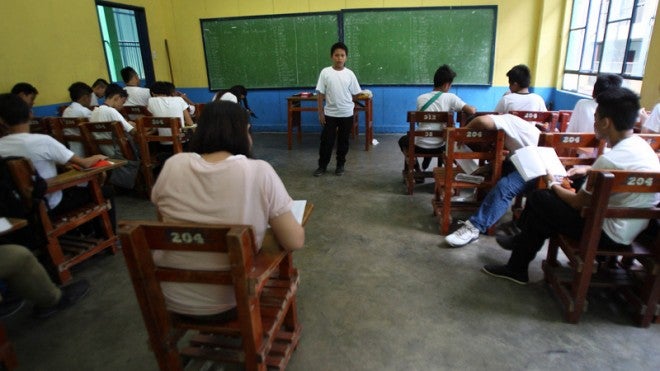 While the language-in-education controversy at the college level is at a cross-point, the lower levels are having troubles of their own. INQUIRER PHOTO/LYN RILLON

MANILA, Philippines–While the language-in-education controversy at the college level is at a cross-point, the lower levels are having troubles of their own.

At a curriculum forum held on July 31, results of a study on “Understanding Best Practices in Mother Tongue-Based Multilingual Education in (MTB-MLE) in the Philippines” have confirmed the fears of many: Problems are piling up, with teachers barely getting by.

Jointly undertaken by the University of the Philippines’ Assessment Curriculum Technology Research Center-College of Education (ACTRC) and the University of Melbourne, the study sought to identify the challenges stakeholders are facing in implementing MTB-MLE and the coping strategies they are adopting to overcome these challenges.

Participating in Phase 1 of the study were eight schools, five MTB-MLE coordinators, 32 mother tongue teachers, and 56 parents of pupils/learners taught in their first language (L1).

The problems revealed by the study are not totally unanticipated. These are the typical hurdles that education reform projects initially encounter while being carried out on a massive scale.

Such difficulties, however, will become serious and irreversible if appropriate coping strategies are not applied soon.

One problem is that stakeholders perceive limited use, as well as lower value of the mother tongue outside specific domains.

As expected, English remains more highly regarded and valued by the community. It is a perception that is borne by facts. Lost or ignored was the primary reason for MTB-MLE, which is to give students a head start in developing higher-order thinking skills, particularly in the elementary grades.

This problem may be a sign that MTB-MLE and the community are at cross-purposes. Advocacy efforts may have to be reinvigorated.

The rest of the concerns points to inadequacy of resources—physical, human, intellectual, as well as financial resources.

This is manifested in the following: the short supply of learning and teaching materials; the tendency to translate existing materials instead of creating new ones directly from the L1; the lack of academic science and math vocabularies in the L1; the teacher’s low proficiency in the spoken and academic L1; and specific to the Tagalog regions, the confusion caused by teaching the Mother Tongue subject (Tagalog), while also teaching the Filipino subject.

Although the ACTRC-University of Melbourne study did not touch on the teachers’ mastery of content, there was some discussion at the forum about teachers’ poor performance in the English, Science and Math tests given in 2012 and 2013.

Clearly, there are serious digressions from our language-in-education policy and formidable-looking obstacles to its implementation.

We argue for solutions that take both the top-down and bottom-up approaches. In other words, we push for addressing the problems in two directions, similar to cooking “bibingka” (rice cake).

Following this bibingka approach, one “apoy sa ilalim” solution is to intensify teacher development efforts, specifically, in the formation of “lesson study” groups at the school level or in a group of schools.

In Japan, where this concept originated, lesson study is a process in which teachers jointly plan, observe, analyze, produce materials, test and refine classroom lessons. A lesson study group is made up of five to six teachers who collaborate with an expert in tackling one lesson at a time.

It is an approach that hits three birds with one stone because it targets the preparation of quality materials, the training of teachers, and the gradual development of the academic vocabulary and register. It is a homemade solution to seemingly insurmountable problems.

Widely credited for the steady improvement of math and science education in Japan, lesson study also applies to language, social studies and other subjects. It is now being popularized in the Philippines by the UP National Institute of Science and Mathematics Education and is being tried out on a division-wide basis in Valenzuela City by Willy Cabral, superintendent of the Department of Education.

To strengthen our MTB-MLE, practice also requires “apoy sa ibabaw” solutions. After all, without fire from the top, the bibingka would be half-cooked.

The top-down approach may be useful in providing clear-cut answers to some language-in-education questions that remain unanswered. Such questions include the following:

— What exactly is the content of the Mother Tongue subject, especially in the Tagalog regions where teachers understandably find overlaps between this subject and the Filipino subject?

— What is the place of code-mixing and code-switching in our language-in-education policy, considering that these practices come naturally in a multilingual country where language contact is inevitable?

— Why are materials continually translated and not created originally from the L1 as is the ideal practice in MTB-MLE policies?

In the end, it is the monolingual mind-set that is the true enemy of MTB-MLE. While this mind-set exists, our efforts at educational reform will surely fail. And with this failure looms a dismal future for our children.