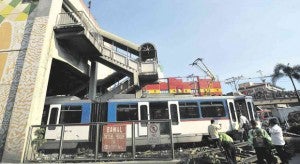 MANILA, Philippines — The Department of Transportation and Communications blamed human error for the embarrassing accident that saw a Metro Rail Transit Line 3 derail and ram through a barrier at Taft Station in Pasay City last Aug. 13, injuring almost 40 people.

The accident, which placed the spotlight anew on the safety of the railway line that has already been suffering from congestion issues, was caused when two drivers and two control center personnel failed to follow the proper coordination procedures and protocol, including ensuring that the trains were property “coupled,” Transportation and Communication Secretary Joseph Abaya said in a press conference Tuesday.

The accident occurred after the first train, which lost power and was being pushed by an operational “assisting train,” uncoupled from the second train and overshot the Taft station, the last south-bound stop for the busy MRT-3. Its automatic brakes did not respond because the train was not powered, Abaya said.

It was later revealed that “standard coupling procedures were not followed,” the DOTC presentation to the media showed.

“That is the conclusion,” Abaya said in response to a query on whether human error was the cause of the accident.  “In his [ driver’s] mind, he thought he followed procedure and the trains were coupled,” Abaya said.

The development indicates that MRT-3’s maintenance provider,  Autre Porte Technique Global Inc., was free of blame from the Aug. 13 accident. Abaya said the DOTC “tried its best to look into an angle” where the current maintenance provider, whose contract has been set to expire Sept. 5,  was at fault but the investigators pointed to the drivers and control center personnel.

Abaya said that the personnel involved, who have been suspended from work, would face administrative charges for “gross neglect, inefficiency in the performance of official functions, conduct prejudicial to the best interest of the service and violation of reasonable office rules and regulations.”

The penalty here could involve removal from office and their benefits being forfeited. He said the two drivers, who each had six years of experience, were hired as contractual workers. He said their employment was renewed every six months.

Abaya said the investigation, confined within the DOTC and Light Rail Transit Authority, also revealed that the train that lost power was traveling beyond the maximum 15 kilometers per hour that the barrier, called a retarding buffer, was designed to handle.

Abaya said the department would implement new guidelines to prevent future accidents while moving forward with upgrading and overhauling the MRT-3 systems and equipment, which have been years overdue.

Among the recommendations is getting personnel more familiar with safety and operational procedures apart from a twice-a-year “re-orientation/re-training program” for all workers in train operations. This will furthermore be tested by a so-called independent authority.

Abaya said they would also conduct so-called performance audits of the divisions in charge of train drivers, control center  and engineering and implement upgrades where necessary.

On the operations side, the speed of the MRT-3 would be slowed down to 40 kilometers per hour from the usual 60 kilometers. LRTA spokesman Hernando Cabrera noted that while this would have the effect of slowing down operations and increasing waiting times, it would reduce operational glitches such as power failures. He added that the older Light Rail Transit  Line 1 was currently running at 40 kph.

In a similar situation such as that on Aug. 13, Abaya said passengers would first be allowed to disembark if a stalled train had to be towed back or pushed forward.

Abaya, meanwhile, said the DOTC would upgrade MRT-3’s signal system, which would be in place by the first quarter of 2015. The rails and trains would also be upgraded.

Read Next
Parañaque City to enforce expanded truck ban starting next week
EDITORS' PICK
Metro Manila to remain under COVID Alert Level 2 until December 15
Legarda: Ending Violence Against Women, a cause for all
A delightful blessing!
Duterte open to making jabs mandatory; Cabinet mulls ‘pressuring’ the unvaccinated
IATF tightens border control, suspends entry of fully vaxxed nationals from ‘green’ countries
Villar Group gears up for AllValue Shopping Party on Dec. 3; around P 1-million promos and discounts up for grabs
MOST READ
Quiboloy warns of ‘much worse than Omicron virus’ if his ‘persecution’ is not stopped
Bongbong Marcos’ conviction in tax case not a crime involving moral turpitude — lawyer
Marcoleta defends pol ads on ABS-CBN
IATF tightens border control, suspends entry of fully vaxxed travelers from ‘green’ countries
Don't miss out on the latest news and information.