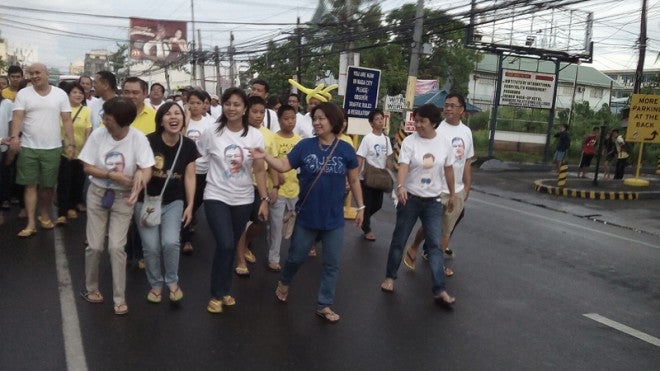 ‘TSINELAS’ SHOWS THE WAY Some 5,000 students, employees, friends and relatives of former Interior Secretary Jesse Robredo join the 4-kilometer Tsinelas Walk in Naga City on his second death anniversary on Monday. Led by Robredo’s widow, Camarines Sur Rep. Leni Robredo (third from left), the “walkathon” highlighted the former Naga mayor’s favorite footwear that, people said, showed how ready he was to get his feet wet while doing his job. ALLAN REY CAMATA/CONTRIBUTOR

NAGA CITY, Philippines—Call it following in his footsteps, a tribute to the man whom many extol for his “tsinelas (slipper) leadership.”

On the second death anniversary of former Interior Secretary Jesse Robredo, some 5,000 students, employees of various government agencies, relatives and friends walked the streets of Naga clad in the favorite footwear of their beloved former mayor.

Robredo, who perished in a plane crash off Masbate province on Aug. 18, 2012, had been known to show up for work and wade the flooded streets of Naga in slippers, ready to get his feet wet. During his wake, one Cabinet member said the lowly footwear showed how accessible Robredo was to his constituents.

Monday’s 4-kilometer Tsinelas Walk started about 5 in the morning and was led by Mayor John Bongat and Robredo’s widow, Camarines Sur Rep. Maria Leonor “Leni” Robredo, who donned yellow slippers and a shirt that had a sketch of her husband’s face while walking this city’s major thoroughfares, from Jesse M. Robredo Coliseum to Eternal Gardens Memorial Park where Robredo was put to rest.

Now in its second year, the “walkathon” drew representatives from various sectors of the Bicol region, including Robredo’s buddies from the Bike for Peace group, and was highlighted by a wreath-laying and the offering of flowers by the public.

The city government had declared Jesse M. Robredo Day a special nonworking holiday to enable more people to join the events honoring the former Naga mayor, including an essay-writing contest for elementary and secondary students on the theme, “Proud Ako kay Jesse. Proud Ako Maging Nagueño” (I am Proud of Jesse. I am Proud to Be a Nagueño).

Robredo’s second death anniversary was also marked by an exhibit of photographs and songs dedicated to his memory, along with paintings by known Bicolano artist Pancho Piano at SM City Naga. Organized by the civic group Ako para sa Pilipino (Myself for the Filipino), the exhibit will run until Friday.

The civic group, formed a few months after Robredo’s death, was meant “to inspire volunteerism and patriotism” among the Bicolano youth, said member Anthony Rocha, who added that the former Naga mayor had motivated him and other young urban professionals to set out on a selfless project right after Typhoon “Glenda” hit Naga City.

Along with student leaders and other young Naga residents, Rocha led the civic group in removing fallen trees, branches, trash and other debris that slowed down government rehabilitation and relief efforts in the wake of the typhoon which hit Bicol July 15 this year.

A life-size statue of a seated Robredo was also unveiled at SM City Naga, the image copied from a photo of the devotee of Nuestra Señora de Peñafrancia during a fluvial procession. The Robredo statue, crafted from fiberglass, was his gift to Robredo’s widow, Piano said.

In Masbate City, at the site where Robredo perished, the city government named a street stretching through four barangays (villages) after the late Cabinet official.

In a phone interview, Masbate City Mayor Rowena Tuason said the street that used to be nameless would now be known as J. M. Robredo Boulevard.