If there was any decision he regretted as President, it was giving an order that ended up being misunderstood and which led to the death of eight Chinese tourists and a hostage-taker in August 2010,  President Benigno Aquino III said in an exclusive TV5 interview aired Friday night.

“I was new in my job, roughly a month,” Mr. Aquino recalled of the botched rescue attempt of a busload of tourists held hostage at Luneta Grandstand by dismissed Police Senior Insp.  Rolando Mendoza, who wanted to be reinstated to his post.

“I thought I should be the one to negotiate with Captain Mendoza.  ‘Can I just promise you: Come down, and I’ll personally see to it that your concern is addressed,’” the President recalled thinking.  His suggestion was shot down as being too risky.

“I heeded their warning that I would be putting many lives at stake if I went there and negotiated with Captain Mendoza,” Mr. Aquino added of the crisis that served as his baptism of fire in office.

The death of the Chinese tourists from the bungled rescue attempt drew protests from Hong Kong and Beijing, strained relations between the Philippines and China and led to a “black” travel advisory against the Philippines, until the crisis was resolved in April this year after negotiations initiated by Manila Mayor Joseph Estrada.

The President said a miscommunication occurred when he ordered the National Capital Region Police Office (NCRPO) director to be on top of the situation.

By some strange turn of events, it was the Manila police director who ended up assuming a key role in ending the crisis, Mr. Aquino said.

“I couldn’t understand why suddenly—the director of the Manila Police District took command when he was not as trained as the NCRPO commander [in handling a hostage crisis],” the President said.

“When the day ended, I was advised—I won’t mention the name of one of the scene commanders— [who] said ‘it looks like we just have to wait a little bit more and it would end well.’ Then suddenly, the bus moved, and Captain Mendoza turned violent,” he recounted. 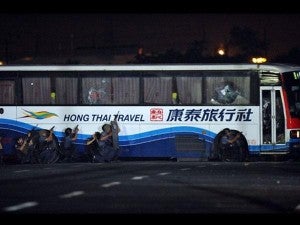 The Aug. 23, 2010, crisis dogged the Aquino administration until it was resolved in April this year, following months of negotiation with Hong Kong, Manila’s expression of “sorrowful regret” and an offer of compensation to the victims’ families.

The compensation, described as “tokens of solidarity” and raised by traders and private individuals, could total HK$20 million (about P115 million), according to a Manila councilor.

In October 2010, the President called for the filing of minor criminal charges, among them “neglect of duty,” against four police officers handling the crisis, as well as administrative charges against then Manila Mayor Alfredo Lim and a deputy ombudsman.

Lim and then Interior Undersecretary Rico E. Puno were held accountable by the Incident Investigation and Review Committee tasked to look into the incident.

In its decision released this week, the National Police Commission also dismissed from service SPO2 Gregorio Mendoza, the brother of the hostage-taker “for [failing] to perform his duty as part of the negotiating panel … and adding to the problem,” and meted out a one-rank demotion to other police officers involved in the rescue attempt “for gross incompetence.”

Tiff with HK over Luneta hostage fiasco finally over