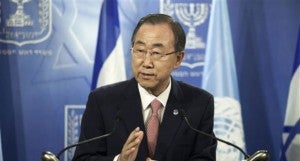 UNITED NATIONS — Leaders of major Jewish organizations on Wednesday accused U.N. Secretary-General Ban Ki-moon of being one-sided in his handling of the crisis in Gaza.

A delegation of 11 Jewish organizations met with the U.N. chief to express their concerns, presenting a letter that listed what they said were 19 violations of international law by Hamas that have gone ignored, said Rabbi Marvin Hier, founder and dean of the Simon Wiesenthal Center, a Jewish human rights group with an office in New York.

Chief among their demands was a need for the U.N. to investigate rocket attacks by Hamas, which controls the Gaza Strip, on Israel’s civilian population, and Hamas’ use of U.N. schools. Rockets were found in three empty U.N. schools during the conflict.

“We are deeply frustrated with the one-sided narrative that is being presented by the United Nations,” Hier said by phone, following the near-90 minute meeting with Ban.

U.N. spokesman Stephane Dujarric said: “The secretary-general reiterated that he fully understands Israel’s legitimate security concerns but also stressed the need to show restraint in their actions in Gaza so as to avoid civilian casualties.”

“He also reminded them that he has, on many occasions, condemned the rocket attacks by Hamas into Israel as well as the tunnels,” Dujarric said in a statement. “The secretary-general told them that the nightmare of the last four weeks has been a terrible reminder that only a negotiated political settlement can bring security and peace to Israelis and Palestinians alike.”

Ban has taken a tough stance on Israel, especially on the deadly attacks on U.N. schools that have been sheltering civilians. But he has also repeatedly demanded that Gaza stop firing rockets at Israel and blamed Hamas for violating an earlier cease-fire.

Israel and the Palestinians have agreed to extend the current cease-fire for five days to allow time for more indirect negotiations, the Egyptian Foreign Ministry said in a statement. The truce had been set to expire at midnight.

Ban spent six days in the Middle East in July and countless hours on the phone with Israeli, Palestinian and other leaders trying to broker an end to the fighting.

The Geneva-based U.N. Human Rights Council, which operates independently of the secretary-general, recently appointed a panel to investigate human rights violations related to the Israel and Hamas fighting.

The Anti-Defamation League, one of the Jewish groups that attended the meeting with Ban, called the panel a “farce” with an outcome that is “all-but ordained.”

The ADL also released a report Wednesday that documents what it called a “dramatic” surge in violence and vitriol against Jews around the world as the crisis in Gaza unfolds.

In Morocco, for example, a rabbi was attacked by someone angry over Israeli air strikes, the report said. In the Netherlands, a Holocaust memorial was defaced with “free Gaza” graffiti.

Hier said the delegation was particularly concerned about a statement Ban made on Tuesday, when he said that the “fighting has raised serious questions about Israel’s respect for the principles of distinction and proportionality.” Those principles of international law require distinguishing between civilians and combatants, and responding proportionately to an attack.

Palestinian and U.N. officials say more than 1,900 Palestinians have been killed in the fighting, the majority of them civilians. In his statement Tuesday, Ban noted that 459 Palestinian children were among the dead. On the Israeli side, 67 people have died, all but three of them soldiers.

Israel’s critics say its reprisals for the rocket attacks are excessive. Israel says it does everything it can to avoid civilian casualties and blames Hamas for using civilians as human shields.

“When that is expressed by the person who heads up the United Nations, I think, frankly, it emboldens Hamas and other groups like it, to continue to take a strategy that uses human shields,” said Rabbi Abraham Cooper, associate dean of the Simon Wiesenthal Center.