Mindanao gets higher share in infra budget than ‘Yolanda’-hit Visayas 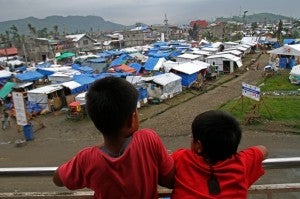 MANILA, Philippines—Mindanao got the lion’s share of the proposed capital outlay (CO) budget of the Department of Public Works and Highways (DPWH) in 2015 in what a lawmaker described as the “highest” share in the country’s history.

During the budget briefing at the House of Representatives on Tuesday, DPWH Secretary Rogelio Singson in his presentation said Mindanao seeks to have P63.13 billion, or 29.5 percent share of the subtotal P213.85 billion CO budget for Luzon, Visayas and Mindanao (excluding the share of the central office).

Cagaya De Oro Rep. Rufus Rodriguez lauded Singson during the hearing and called Mindanao’s share the “highest in the history of the republic.”

“I manifest my 100 percent support for the approval of the DPWH budget,” Rodriguez said amid applause by the audience.

Mindanao seeks to get even a higher share than the Visayas area, which was badly hit by Super Typhoon Yolanda in November 2013.

But Singson said Visayas should not worry because the proposed CO budget does not include the P22.7 billion Yolanda rehabilitation and reconstruction budget.

Highway and flood control projects took up the largest share of the DPWH proposed capital outlay budget for 2015.

The proposed budget for highways, consisting of road and bridges, is an increase from P129.42 billion in the 2014 national budget.

DPWH is seeking a P287.826 billion budget in 2015, or up 39 percent from P206.634 billion in the 2014 budget. Capital outlay, including infrastructure and non-infrastructure, took up the largest share in the proposed budget at P270.2 billion, followed by maintenance and other operating expenses, P12.416 billion, and personal services, P5.186 billion.