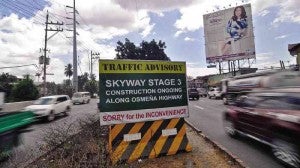 A traffic advisory for the construction of the Skyway Stage 3 project is displayed along Osmeña Highway in Manila. RICHARD A. REYES

MANILA, Philippines—Highway and flood control projects took up the largest share of the Department of Public Works and Highways’ (DPWH) proposed capital outlay budget for 2015.

In his presentation during the budget briefing at the House of Representatives on Tuesday, DPWH Secretary Rogelio Singson said the proposed budget for highways amounts to P173.51 billion or 64.3 percent of the total P269.71 billion capital outlay (CO) infrastructure budget.

The proposed budget for highways, consisting of road and bridges, increased from P129.42 billion in the 2014 national budget.

This is an increase from the P33.62-billion allocation in the 2014 budget, Singson said.

The DPWH’s CO budget for infrastructures has been increasing from P90.7 billion in 2011 to P190.9 billion in 2014, the official added. The proposed 2015 budget is a 41-percent increase to P269.7 billion from the allotted budget last year.

DPWH is seeking a P287.826 billion budget in 2015, or up 39 percent from P206.634 billion in the 2014 budget. Capital outlay, including infrastructure and non-infrastructure, took up the largest share in the proposed budget at P270.2 billion, followed by maintenance and other operating expenses, P12.416 billion, and personal services, P5.186 billion.

Gov’t to hike infrastructure spending in 2014