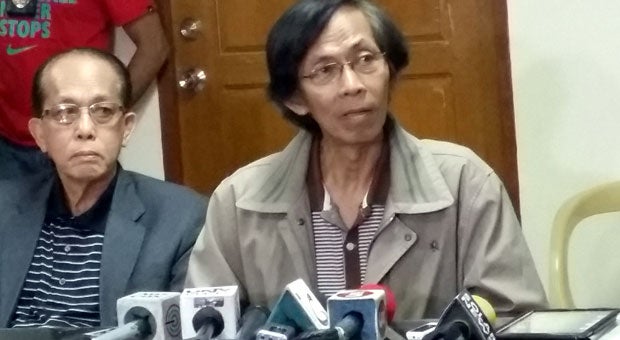 Retired Gen. Jovito Palparan during a press conference. On his right is his counsel Atty. Narzal Mallares. Tetch Torres-Tupas/INQUIRER.net

MANILA, Philippines — Retired Major General Jovito Palparan, one of the accused in the kidnapping of two students from the University of the Philippines, would face conviction, National Union of People’s Lawyers (NUPL) Secretary General Edre Olalia said on Tuesday.

“We are legally confident because we have three eyewitnesses that identified the accused. That is more than enough proof to convict the accused,” Olalia, one of the counsels of the mothers of the missing students, said in an interview over Radyo Inquirer dzIQ 990 AM.

“But this is a challenge to the justice system on how soon they could make a decision to the case,” he said.

Palparan was arrested early Tuesday in Sta. Mesa, Manila in a joint operations by the National Bureau of Investigation and Armed Forces’ Naval Intelligence Group. He had a warrant of arrest on charges of kidnapping and serious illegal detention of UP students Karen Empeño and Sherlyn Cadapan in 2006.

“I just talked to the mother of Empeño. She was shaking when she found out. That moment that we have been waiting for has finally happened. But what is more important for them that their children surface because they have been missing for eight years,” he said.

He said the chances that the two students are still alive are getting “slimmer.”

“If you will ask the parents of course they are not losing hope. But to be realistic, after eight years the chance that they are alive are getting slimmer. But miracles can still happen. This is a challenge for Palparan to bring back the missing students,” Olalia said.

Empeño and Cadapan were abducted in Hagonoy, Bulacan in 2006.

On Monday, an arraignment is scheduled for Palparan. Another accused, Master Sergeant Rizal Hilario, is still at large.