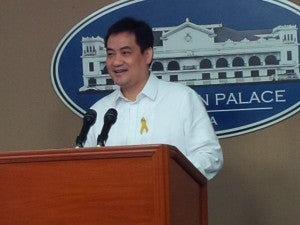 MANILA, Philippines – One way to look at the latest Social Weather Stations (SWS) survey on the Aquino administration’s net satisfaction rating was that although it has reached an all-time low, it was still high compared to past administrations, Malacañang said on Monday.

“It’s still by far the highest among the lowest of the administrations,” Presidential Spokesperson Edwin Lacierda said during a televised press briefing.

Dropping from +45 in March to +29 in June, it is the lowest net satisfaction rating received by the Aquino government.

“The government is committed to address all those issues and a survey is, again, always a snapshot in a particular period of time,” he said.

Lacierda also pointed out that the administration rated high for particular issues such as protecting the environment, defending the country’s territorial rights, promoting the welfare of Filipino overseas workers, foreign relations, and helping the poor.

Lacierda, however, lamented that the Maguindanao massacre trial was still being attributed to the Executive when it is already under the Judiciary.

“They are the ones handling it. And in fairness to the judiciary…They have expedited, tried to hasten the pace of the Maguindanao massacre trial,” he said.

Asked if the low ratings were a reflection of the government’s inability to achieve inclusive growth, Lacierda said the truth was that poverty cannot be eliminated within Aquino’s term.

However, he said, “Inclusive growth will always be a commitment of our administration and we also know that poverty (cannot be) eliminated in six years…Secretary (Arsenio) Balisacan has mentioned this time and again. It takes decades to eliminate poverty.”

He said that was why the government was putting in place poverty alleviation programs such as conditional cash transfer (CCT).

Lacierda said that surveys are not able to show the effect of the CCT on the people.

“From the people on the ground, they feel it,” he said.